How big will OpenNebula 2.0 be?

OpenNebula 2.0 is right around the corner, and we were curious to see how much effort has gone into it. As it turns out, nearly double the effort we put into version 1.4, at least measured by the number of lines inserted/deleted/modified in our code repository: 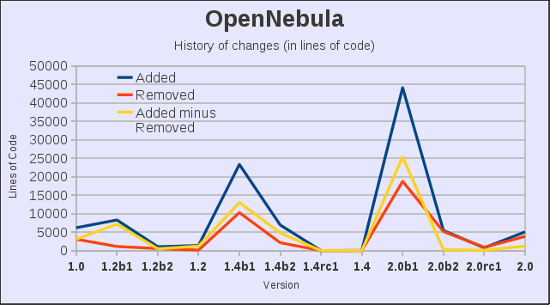 Of course, lines of code are a notoriously imprecise metric, so take the above with a healthy dose of salt. Plus, the above doesn’t account for the additional effort we’ve put into quality assurance, preparing documentation, helping users on IRC and on the mailing list, etc.

In any case, we’re really happy with the 2.0 release cycle, and specially with all the great contributions and feedback we’ve gotten from our community. Looking at the above graph, we’re also amazed at how far OpenNebula has come, from a small technology preview that we initially just ran on a small cluster to a stable and well-tested piece of software capable of wrangling tens of thousands of virtual machines. Another interesting fact about the OpenNebula source code is the number of programming languages and technologies used: C++/C (63.02%), Ruby (21.89%), Java (6.19%), Shell Script (5.79%), Lex & Yacc (2.13%).

So stay tuned… before you know it, you’ll be getting a release announcement from us!