Rancher has support for Docker Machine-based provisioning making it really easy to create Docker hosts on cloud providers. It creates servers, installs Docker on them, and configures the Docker client to talk to them. Using the Machine integration in Rancher, we can launch compute nodes directly from the Rancher UI.

Rancher recently has added support for docker-machine plugins, so it is possible to add Machine Drivers in order to create Docker hosts on any cloud providers.

This post will introduce Rancher and show how to launch OpenNebula Virtual Machines from the Rancher UI and provision them to run Docker compute hosts, which can then be used to run Docker containers. In the next steps we are going to install Rancher and use the OpenNebula docker-machine plugin to add virtual machine as hosts to Rancher environments.

Let’s first create a VM with docker, by using docker-machine

Once the machine is created, we can install the rancher server

After about a minute, your host should be ready and you can browse to http://rancher-server-ip:8080 and bring up the Rancher UI. If you deploy the Rancher server on a VM with access to the to the Internet, it’s a good idea to set up access control (via github, LDAP …). For more information regarding the Rancher installation (single node and HA setup and the authentication) you can refer to the official documentation

In order to add OpenNebula Virtual Machines as hosts to Rancher we need to add the docker machine plugin binary in the Admin Machine Drivers settings. 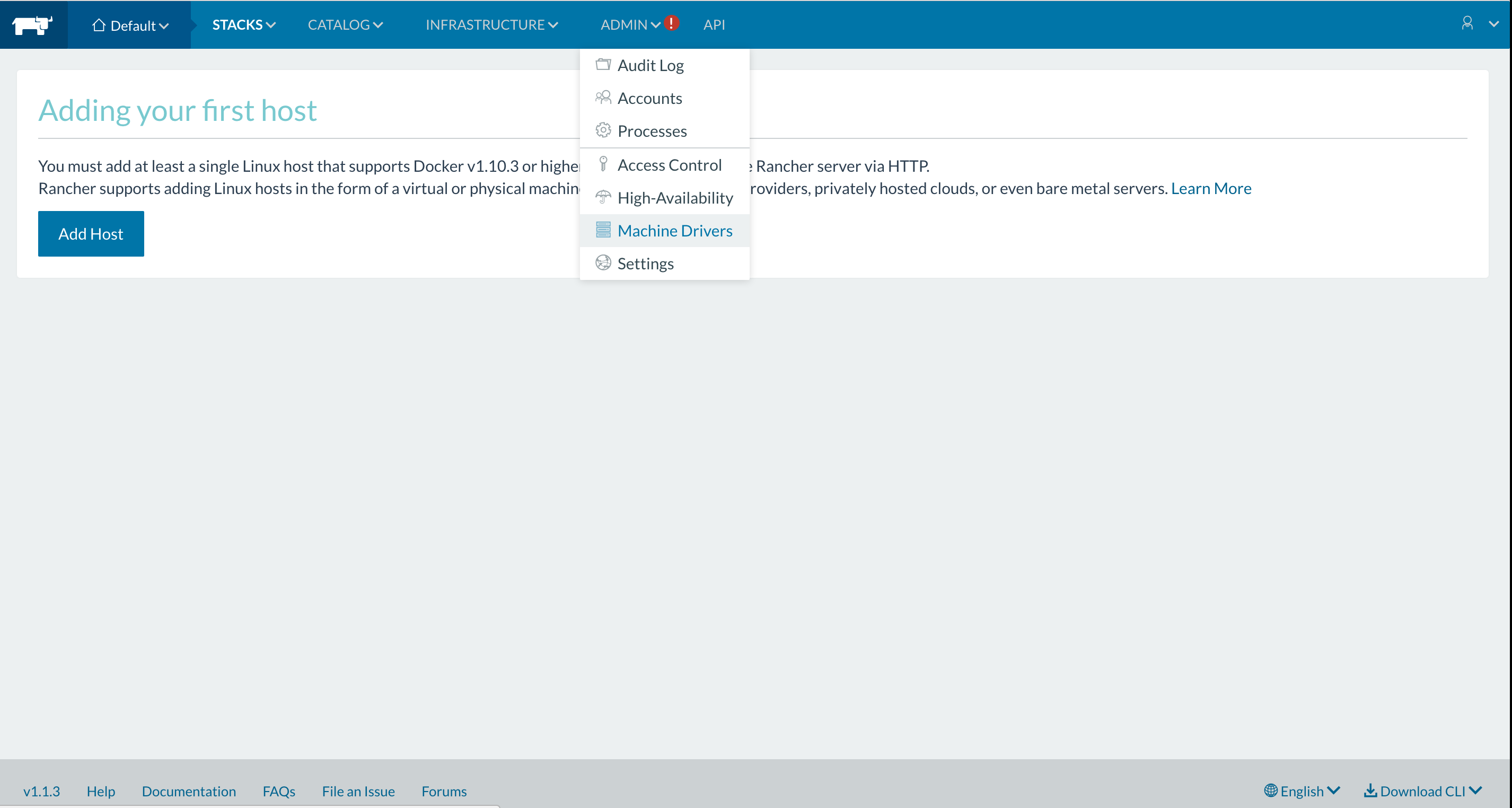 Once you added the machine driver, a screen with the OpenNebula driver should be active. 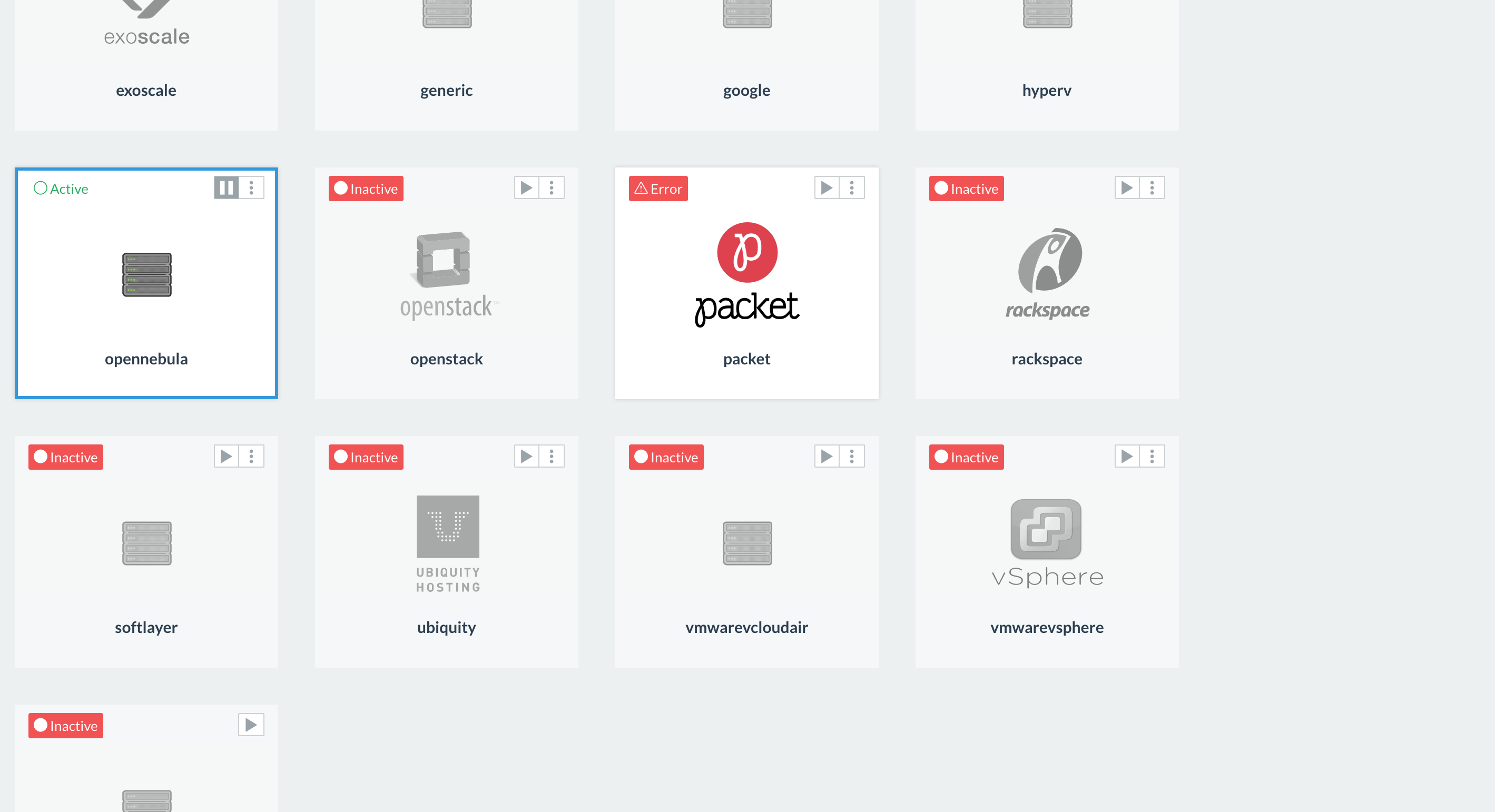 The first time adding a host, you will see a screen asking you to confirm the IP address your Rancher server is available on, i.e. where the compute nodes will connect.

Once you save the settings, you can proceed to create the first Rancher host. 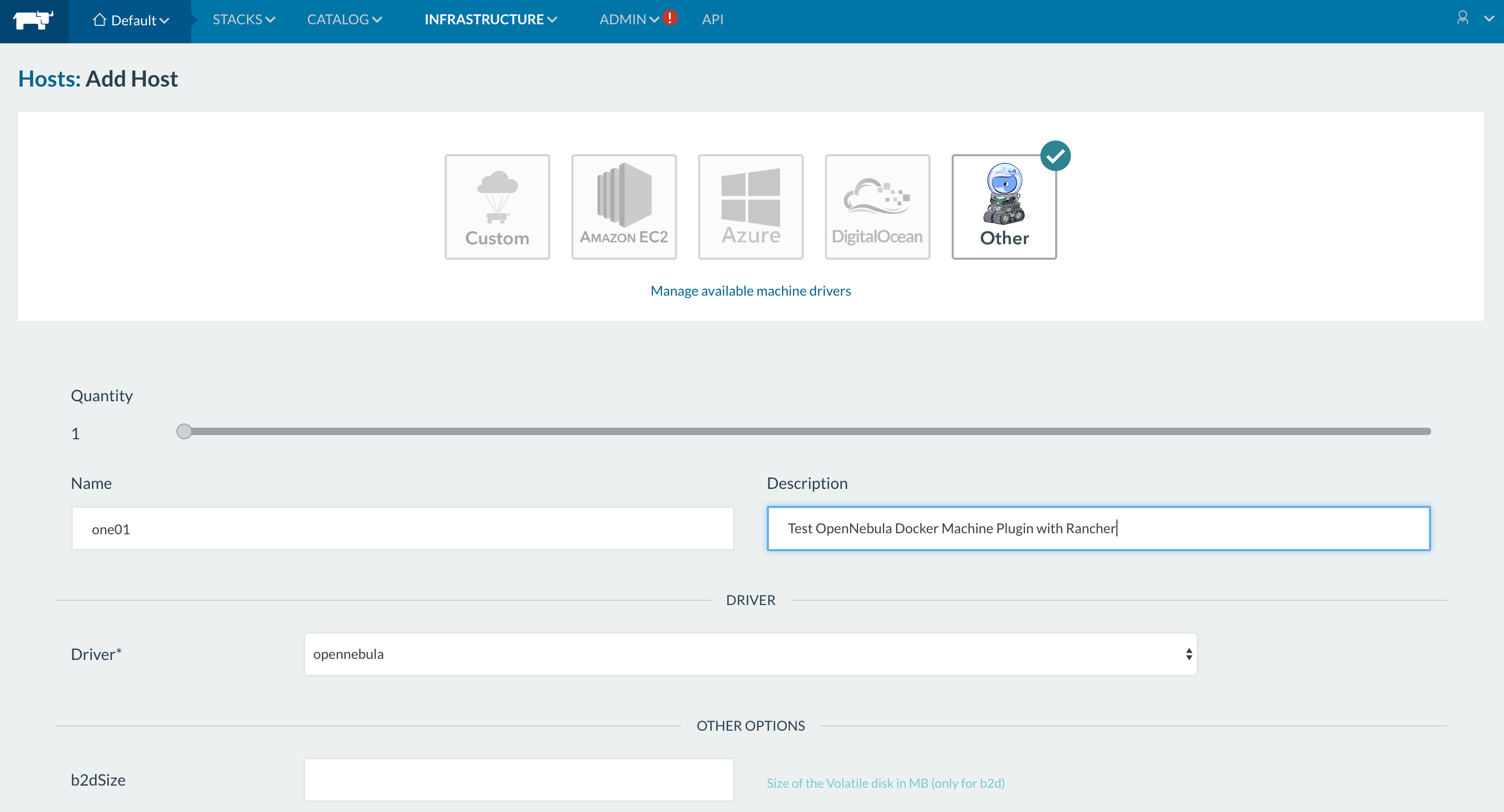 Select the opennebula driver and insert at least the following options:

and then you can proceed to create the host. After few minutes, when the creation process is complete, you should get a screen with the active host. 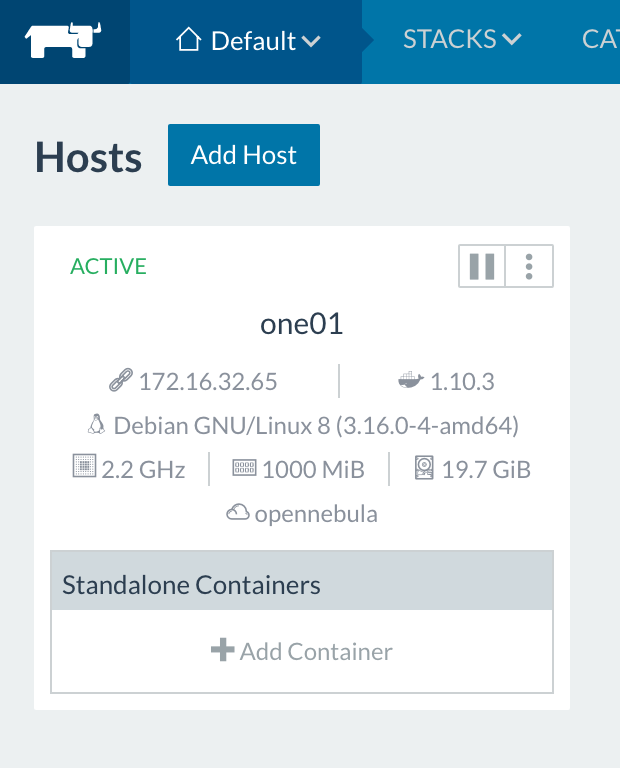 To test the environment, you can select the host and add a container: 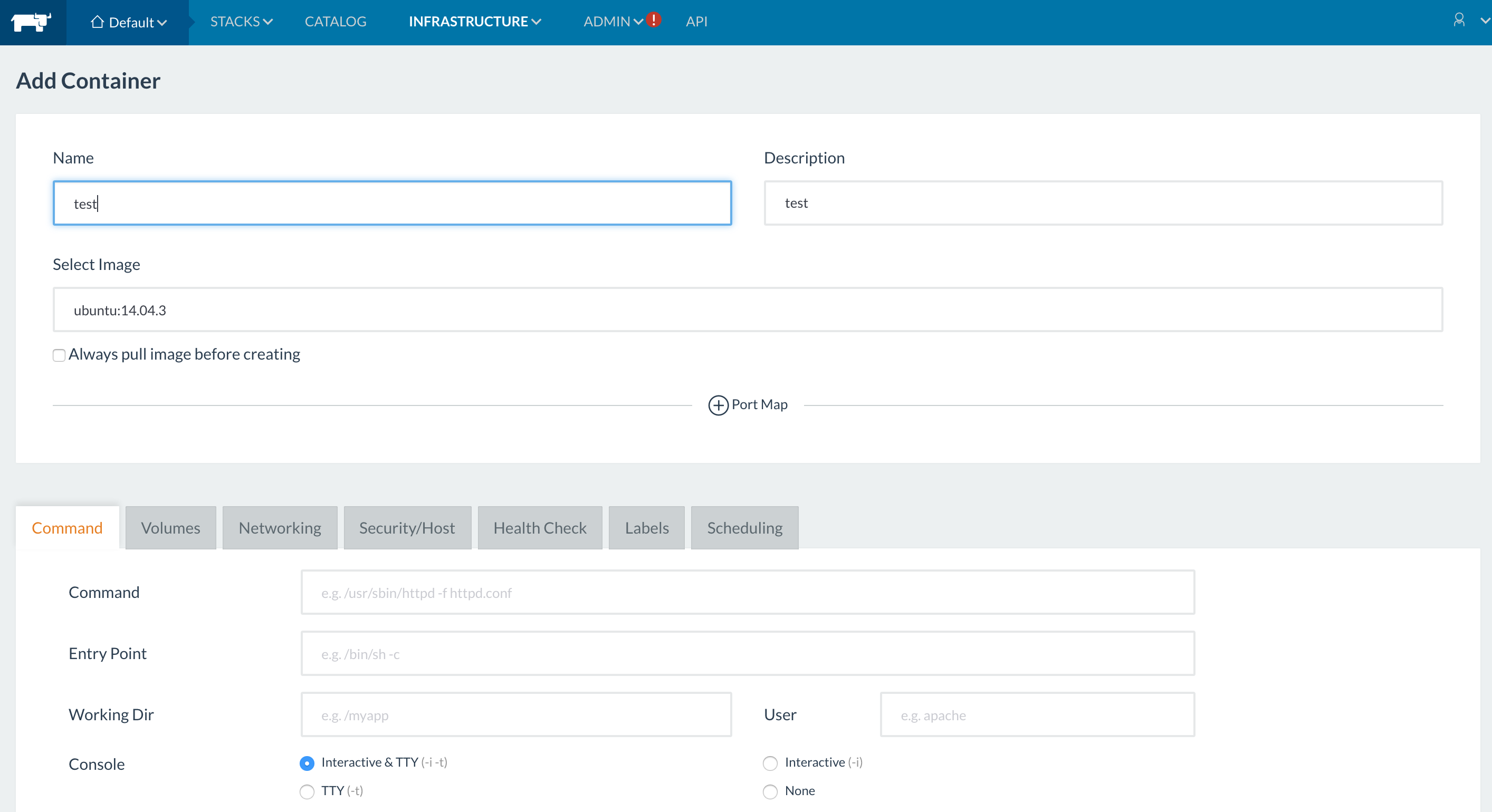 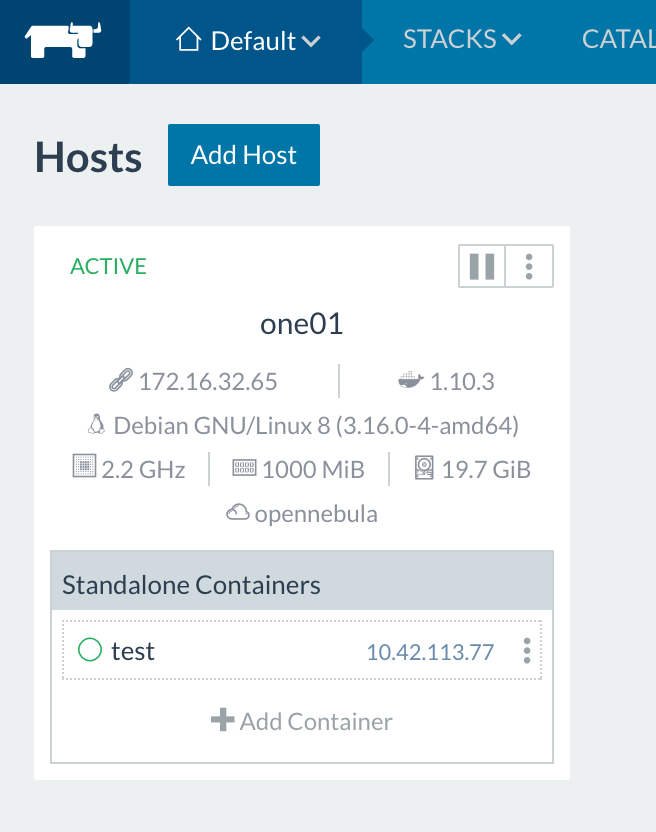 That’s all, we will be back soon with another post about the integration of Rancher and OneFlow to deploy multi-tier services on OpenNebula clouds. Stay tuned!