SVMSched: a tool to enable On-demand SaaS and PaaS on top of OpenNebula

SVMSched is a tool designed to enable on-demand SaaS clouds on virtualized infrastructures, and can also be easily set up to support PaaS clouds. SVMSched can be used to build cloud platforms where a service is deployed to compute a user-given dataset with a predefined application based on a given hardware requirements (CPU, memory). In such a context, SVMSched seamlessly and automatically creates a custom virtual computing environment to run the service on-the-fly. Such a virtual computing environment is built to start the execution of the service at the startup, and is automatically destroyed after the execution, freeing up allocated resources.

The figure below shows the architecture for integrating OpenNebula with SVMSched. In brief, SVMSched : 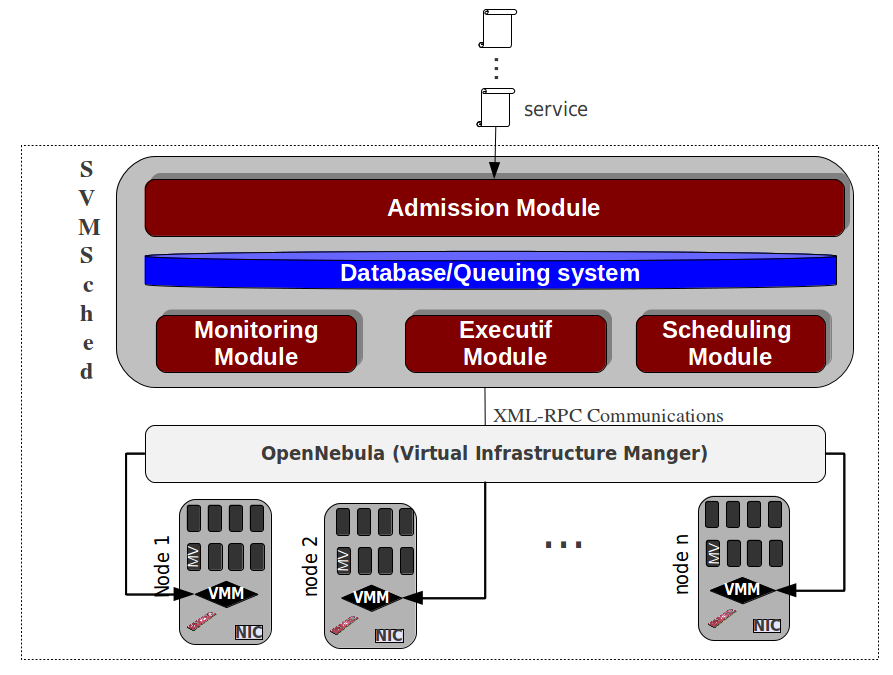 Without being exhaustive, these are some situations where SVMSched can bring you significant added values.

Typical contexts are: executing services based on computational applications (data/input => processing => results/output), resource/platform leasing, etc. Software testing (validation testing, non-regression testing, etc.) is a typically example. In such a context, the infrastructure behaves as a dynamic virtual cluster, in which virtual machines are created and deployed on-the-fly for specific and limited lifetimes after which they disappear.  Each virtual machine has a specific/custom configuration (software stack, amount of CPU, memory size). After its lifetime, depending on (determined by) the time required to run the service, the virtual machine is automatically destroyed to free allocated resources. The following points explain the few things you need to set up such a cloud :

Co-hosting of production and development services

A typical case is when you want to use idle resources of a production infrastructure to carry out some development tasks such as software testing (init tests, Non-Regression Testing or NRT, etc.). SVMSched allows you to distinguish production tasks (prioritized and non-preemptable) to best-effort tasks (non-prioritized and preemptable).  So, when operating, SVMSched can automatically preempt best-effort jobs when there are not resources available to run queued production tasks. Preempted jobs are automatically resumed as soon as resources become idle. The decisions of preempting and resuming are took autonomously. Assuming that you already set up a SVMSched cloud, the following commands show how to run two jobs in production and best-effort modes, respectively.

SVMSched (Smart Virtual Machine Scheduler) is a tool designed to enable and ease the set-up of on-demand SaaS and PaaS services on top of OpenNebula. SVMSched is open source and available for free downloading [1]. However, SVMSched is still at a development stage, not yet production-ready.  Being an ongoing project, feedbacks and collaborations are appreciated. So, don’t hesitate to contact authors if you have questions, suggestions, comments, etc.