We’d like to thank all of you who shared your perspective on OpenNebula as part of our 2018 Architecture Survey. This is the fourth architectural survey of OpenNebula since 2012, and the results were collected during the period of December 4, 2018 through January 11, 2019. Your participation here is fundamental to our strategic focus to best provide features and support that align with the infrastructures platforms and configurations demanded by you.

We have only included in the analysis the respondents that are using OpenNebula 5.x (latest series) and who we deem reliable because they have provided identification details that allow us to verify the answers of the survey. This is important given that our main aim is to have accurate and useful information about OpenNebula deployments. This survey is not a market survey and does not express all OpenNebula deployments worldwide.

The data provided helps to shed light on how OpenNebula is being used by the community, as well as providing some indicators of where to aim for the future. In comparing to our previous survey taken in 2015, there are some other notable findings:

And OpenNebula continues in its aim to be the simplest and most flexible open source solution for private cloud and data center virtualization management.  Our user community rates it highly because of its Simplicity (83%), its Openness (69%) and Flexibility (56%), as well as its Vendor-neutrality (52%).

Thank you again for participating in our survey! Below you can review the detailed results.

A.  About the Organization

This year we broke out the demographics across multiple categories, with “Information Technology”, “Cloud Hosting and MSP’s”, and “Telco and Internet” companies assuming large portions of the demographics – but those added together with “Media and Gaming” and “Web, SaaS, and eCommerce” total up to a growing 75% of Industrial/Commercial users. 14% of users work in Science, R&D, and Academia, while just under 11% work for Government and Non-Profits. 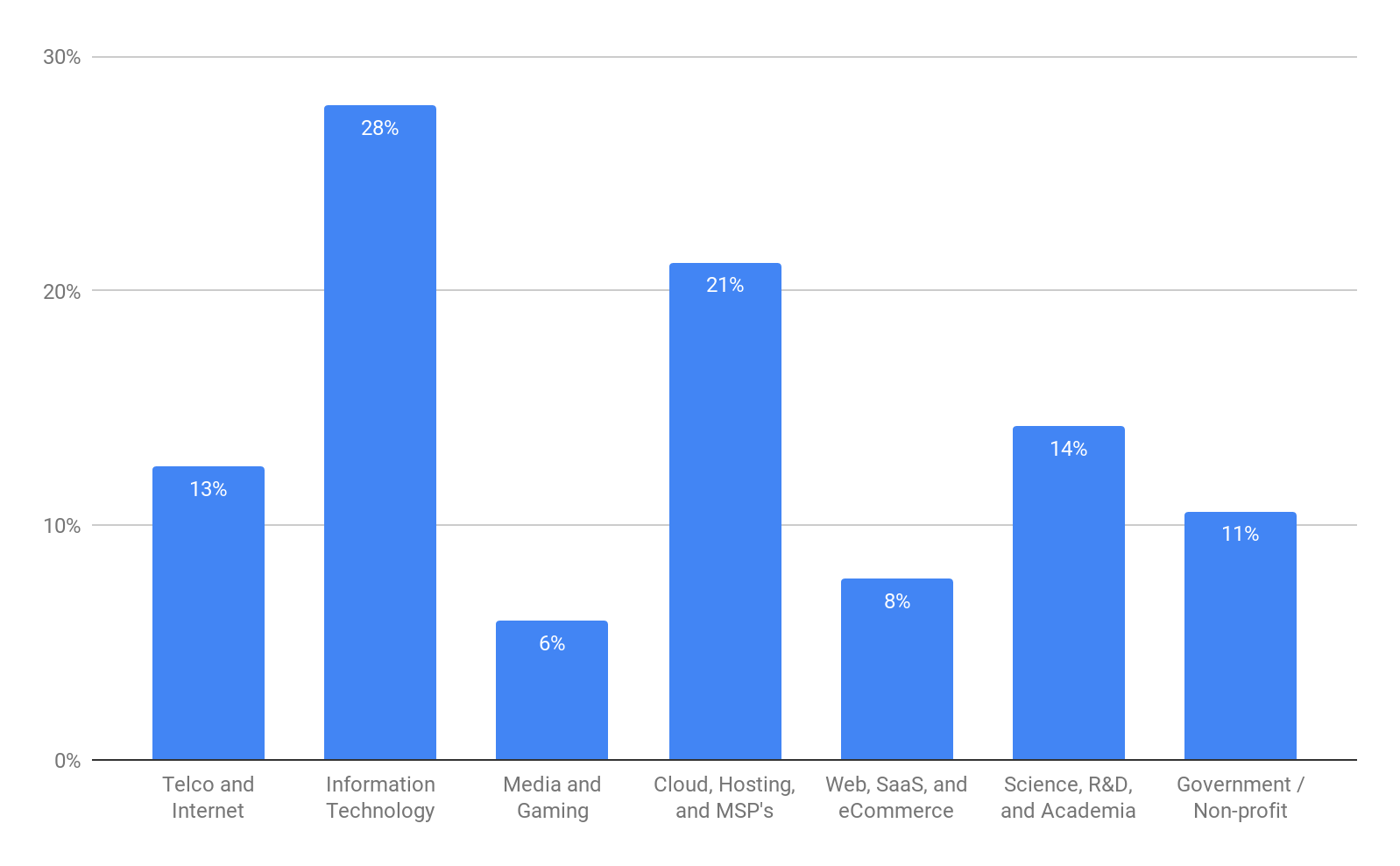 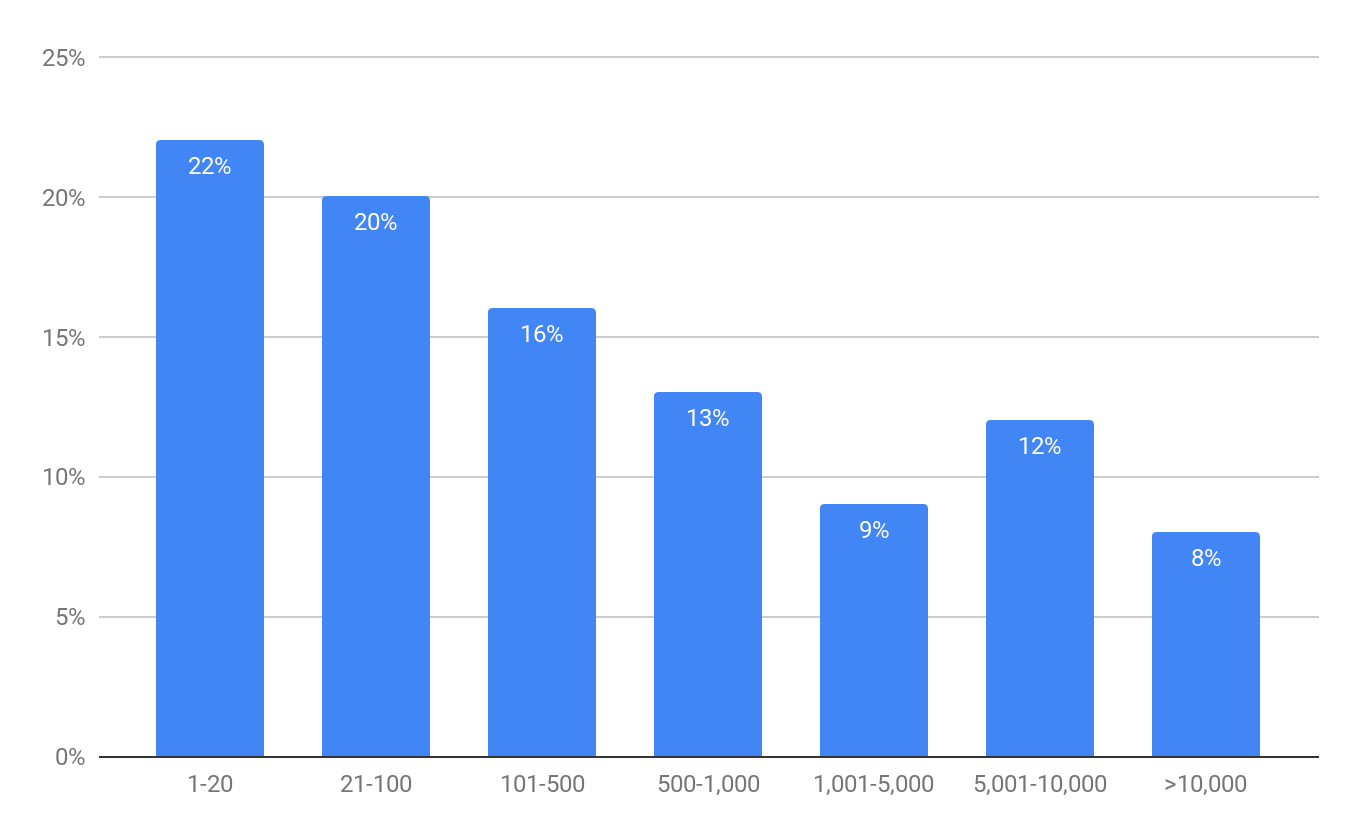 Size of Organization (# of employees)

48% of deployments are located in Europe or in Russia, a slight shift downward from 50% in our last survey. We also see a small tick upward in growth within North America to 33% from 30%. These two geographic regions continue to lead the usage of OpenNebula by a large margin. 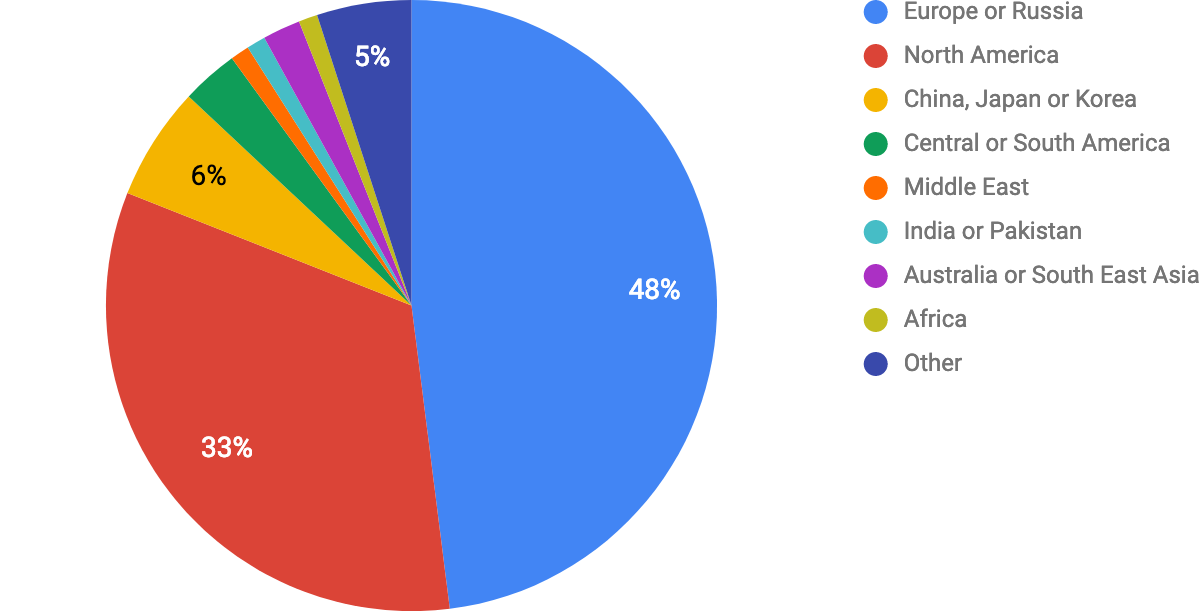 B. About Cloud Usage

The usage of OpenNebula for Production workloads has seen steady growth to 85%, from 73% in 2015. Its use for Development and Testing has remained firm at 73%, while there is significant Proof of Concept work being done, as well (19%). 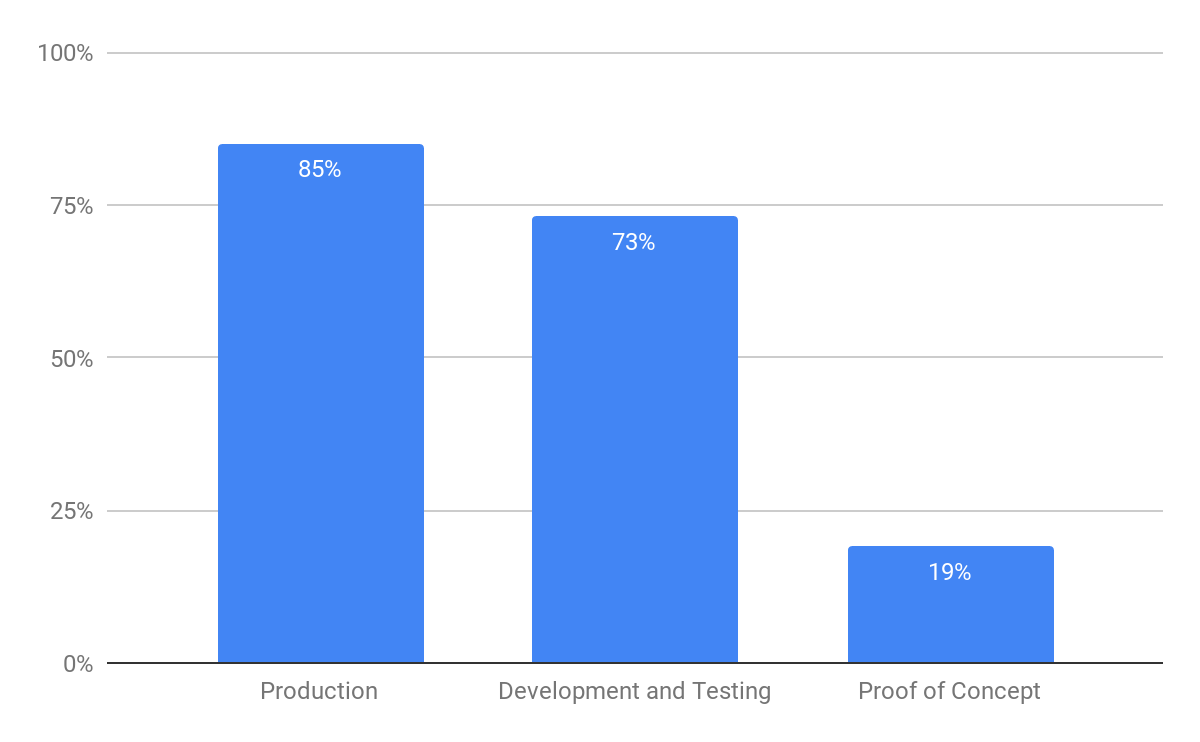 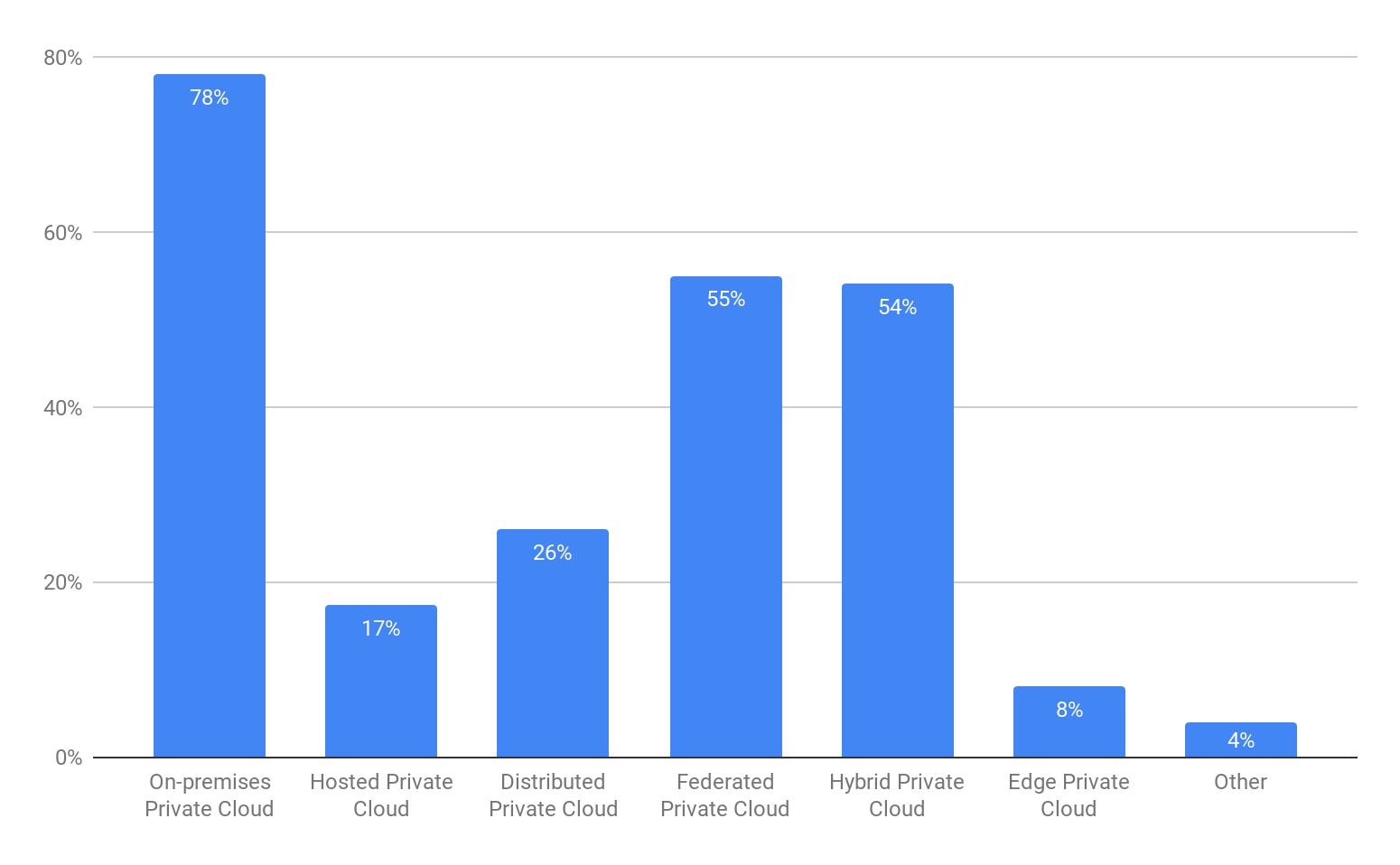 And from a use case perspective, 71% of organizations use OpenNebula for “Data Center Virtualization management”, and 48% use it to establish “Public Clouds, VPS and MSPs”.  39% of users take advantage of OpenNebula to create cloud environments on top of their VMware infrastructure, and 37% are laying the groundwork for Enterprise clouds. 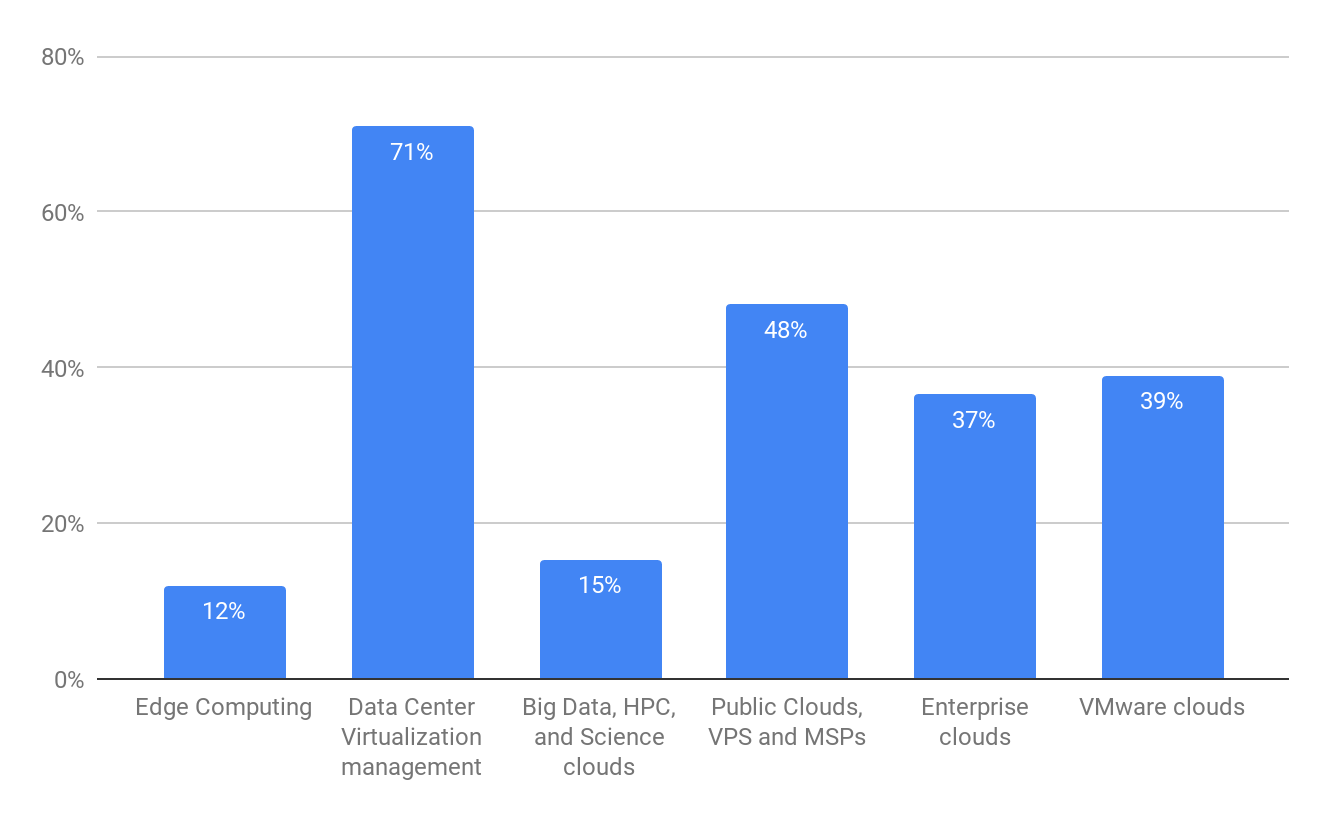 Type of Use Case (allows for multiple selections) 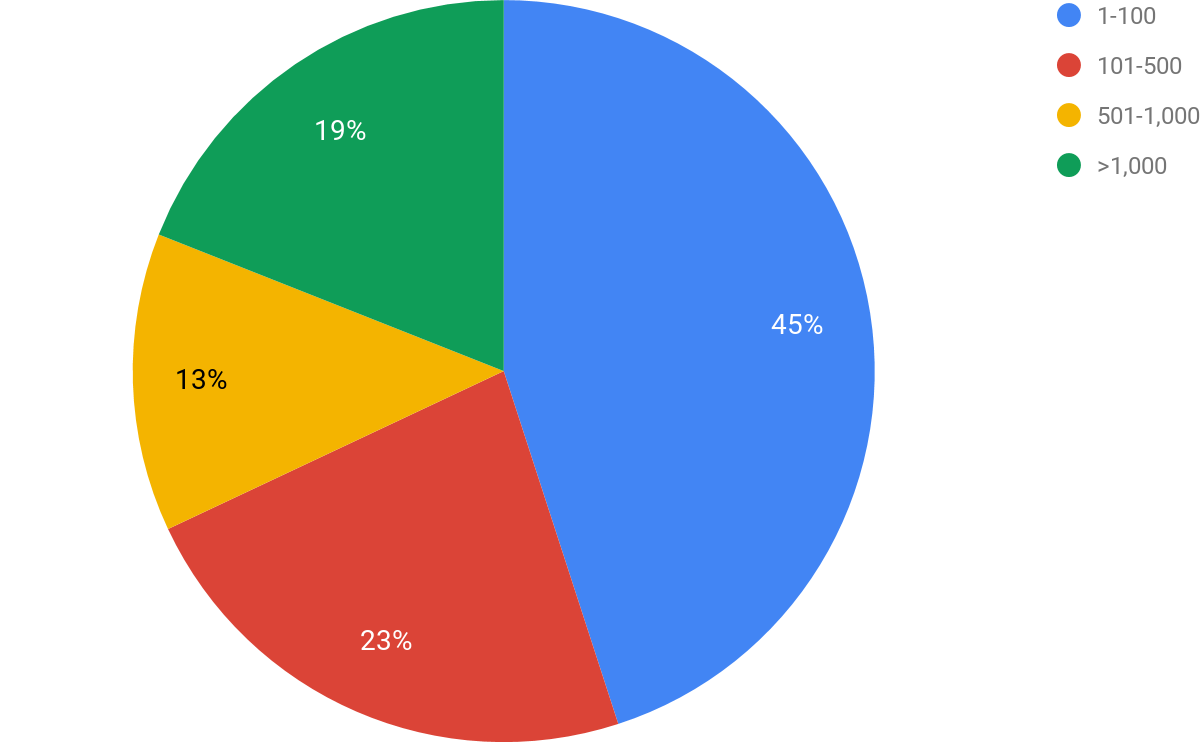 Another new question we introduced this year had to do with understanding with which other Cloud providers users interact.  Amazon Web Services (AWS) is, by far, the most common at 61%, with Microsoft Azure following at 35%. 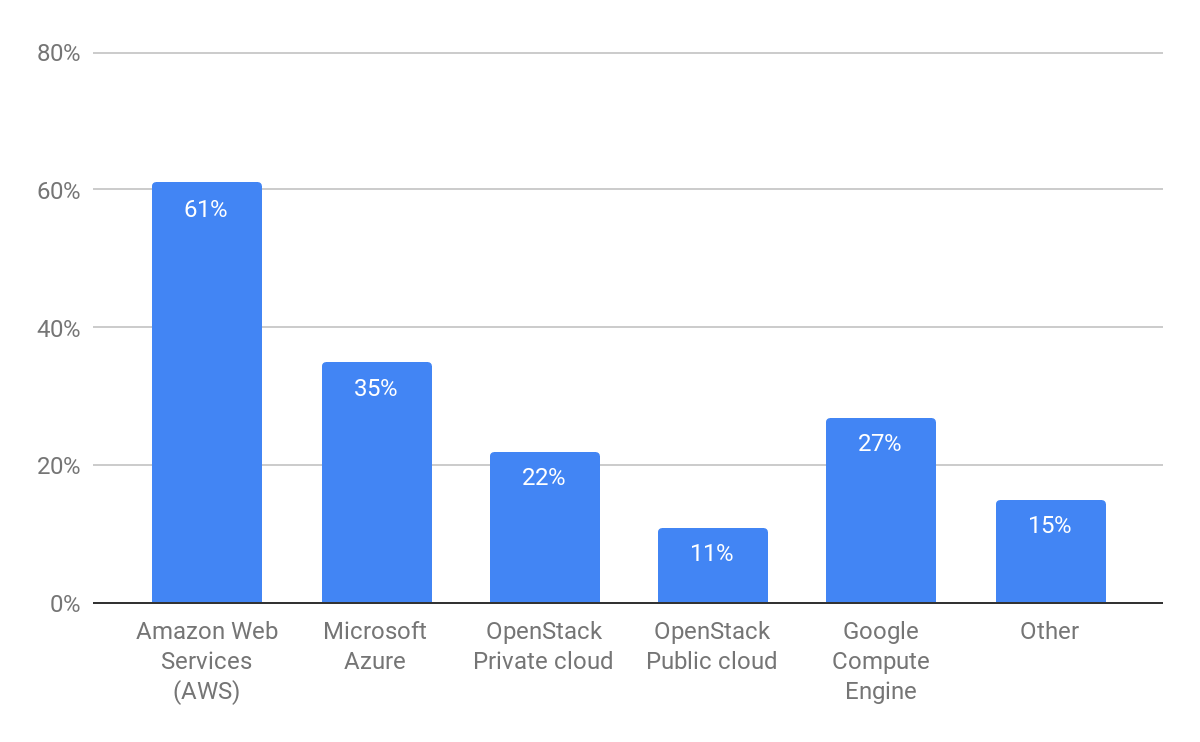 Interaction with Other Cloud providers (allows for multiple selections)

59% of OpenNebula environments are “federated”, meaning that they have more than a single zone, and 9% are running more than 10 different zones.  This is up from 51% and 5%, respectively, from the last time we collected data. 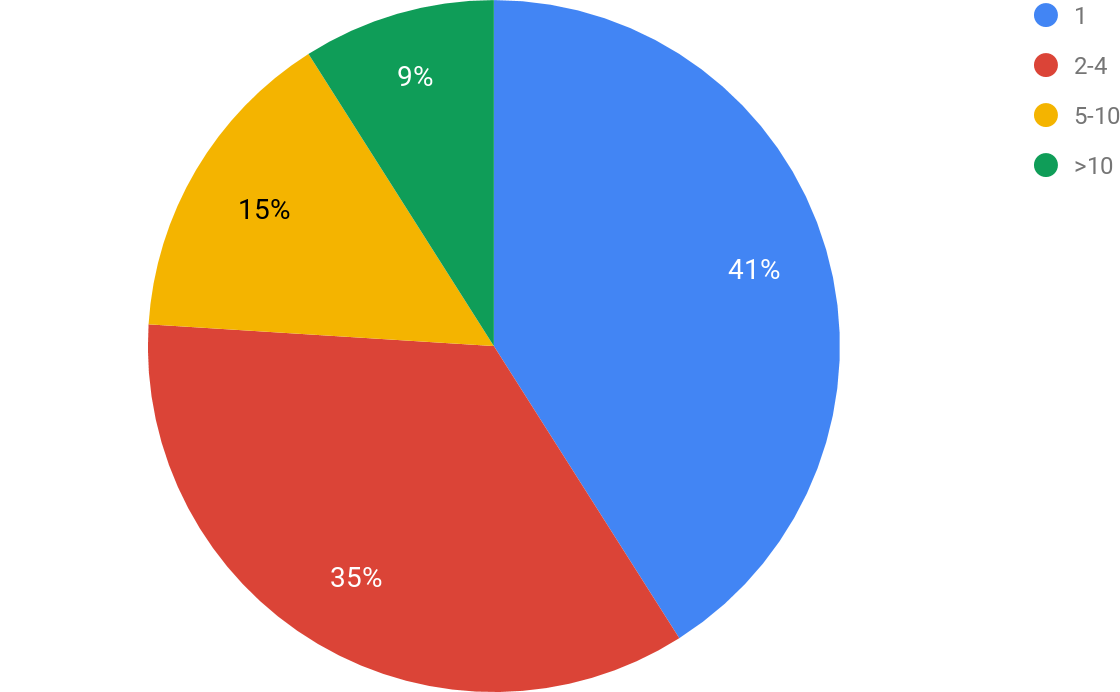 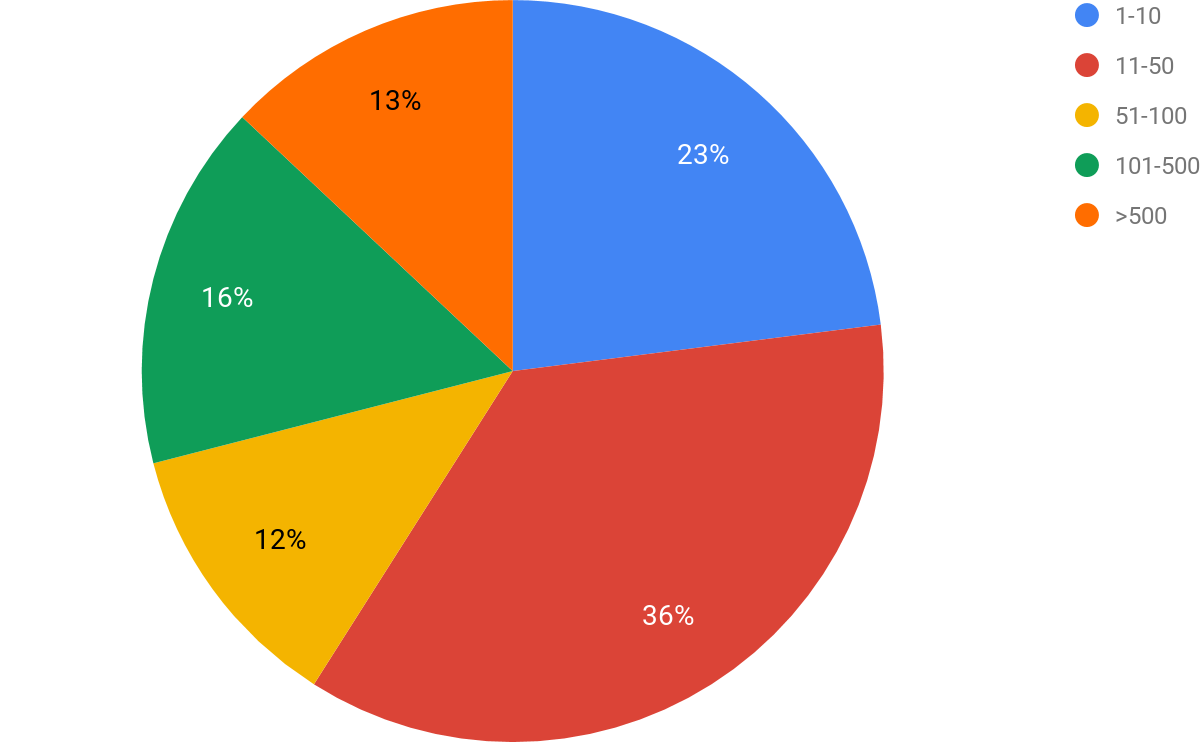 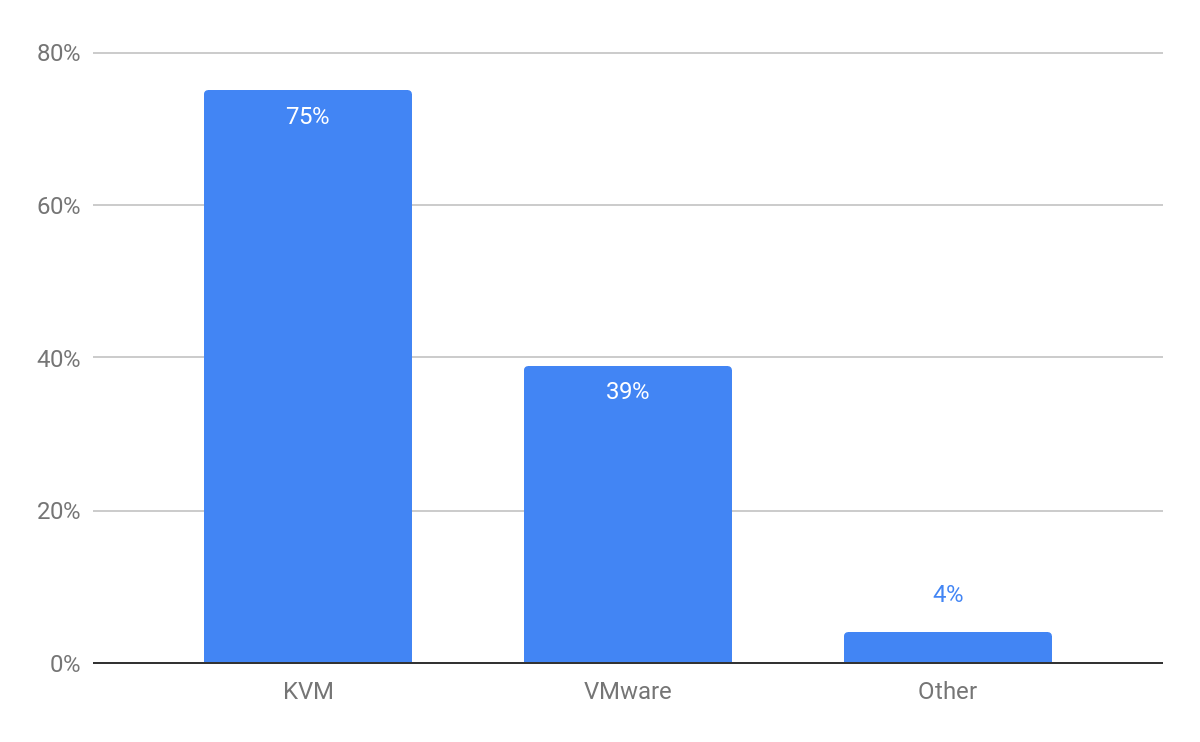 56% of users have implemented some form of a “hybrid cloud” in their environment. And the most popular Public cloud providers used in tandem with OpenNebula are Amazon Web Services (AWS) at 39% and Microsoft Azure at 22%.  These two were most popular in our last survey, as well, but have increased slightly, where they were 30% and 16% respectively. 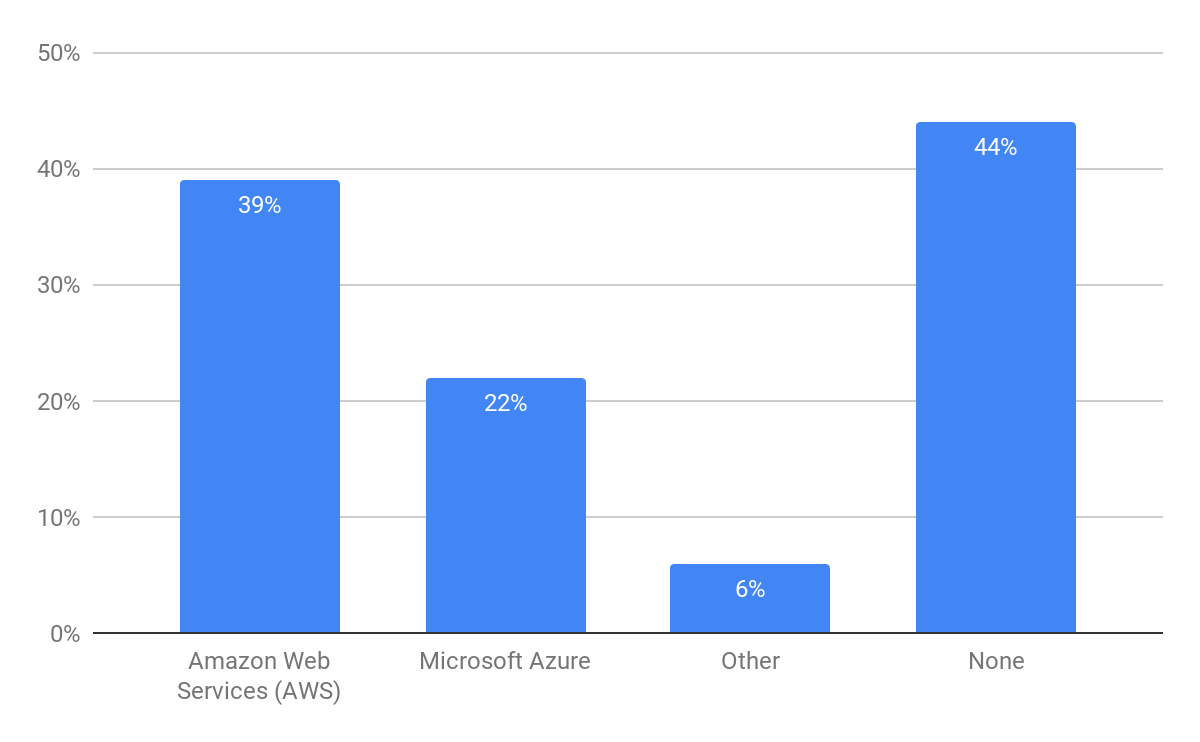 Shared datastores at 53% and Ceph at 40% remain the most widely used storage solutions in open environments – while Shared datastore usage dropping slightly from 60%, Ceph has remained the same at 40%. VMware FS at 38% is used in VMware-based deployments, mainly through vCenter, and dropped slightly from 40%. 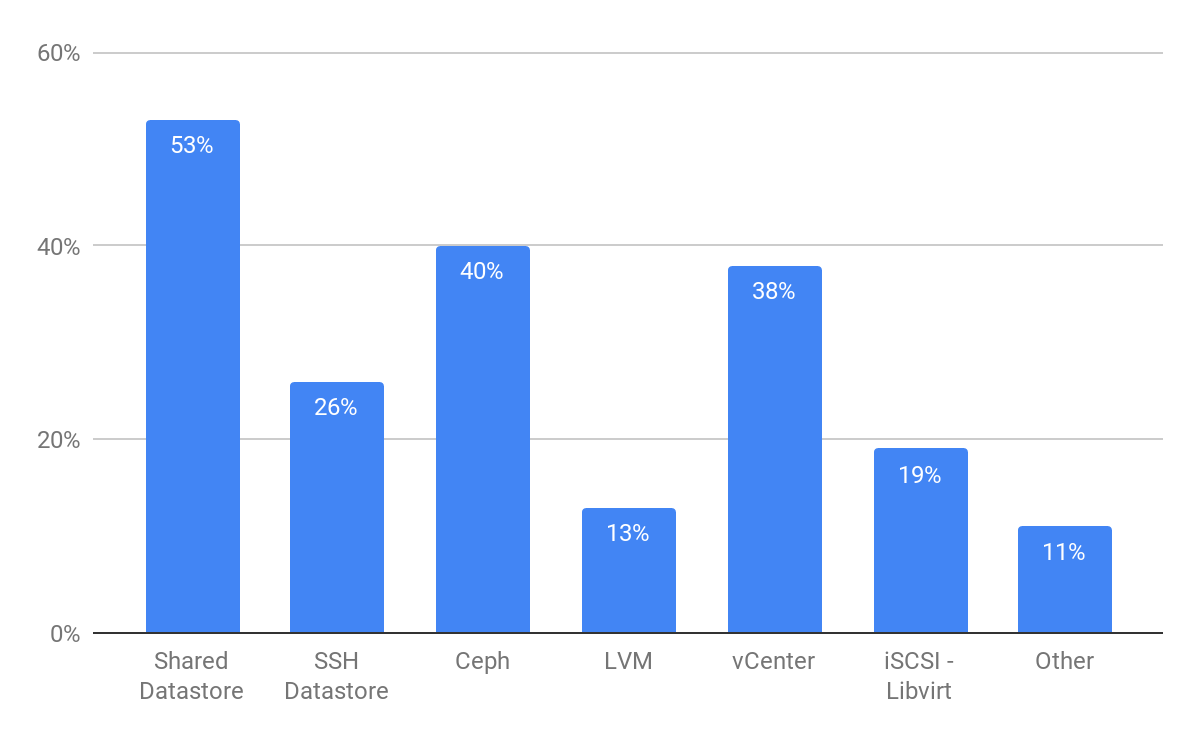 The most common network configuration is still the Standard Bridged network configuration (40%). 802.1Q VLAN (31%) and Open vSwitch (25%) remain widely-used choices as well, while there has been some movement to VXLAN and OpenSwitch VXLAN with 14% and 10% respectively.  And for VMware deployments, we see a steady usage of VMware networking (37%), primarily used through vCenter. 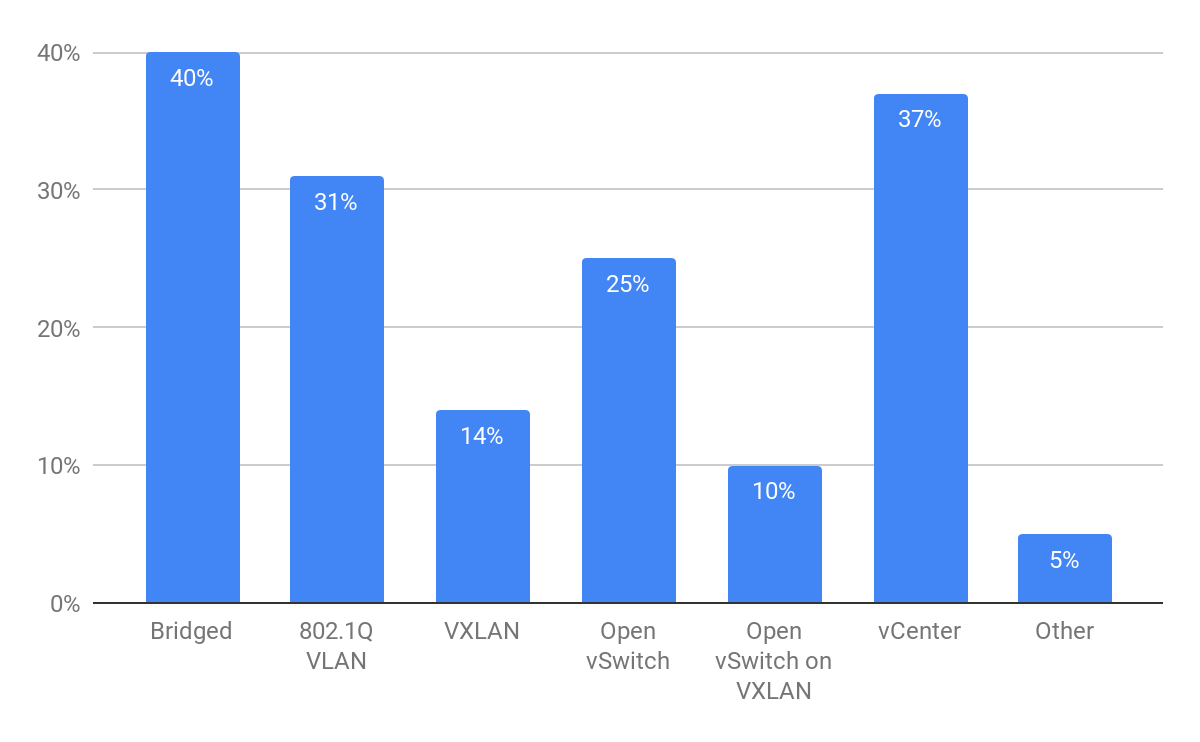 Authentication practices, while shifting slightly to using external authentication systems, have remained fairly static.  The majority of deployments use the built-in User/Password authentication (68%), and LDAP, and Active Directory have gained slightly more traction since the last survey with 22%, and 21% usage respectively. SSH, while widely used (42%) has seen a slight drop from 50%. 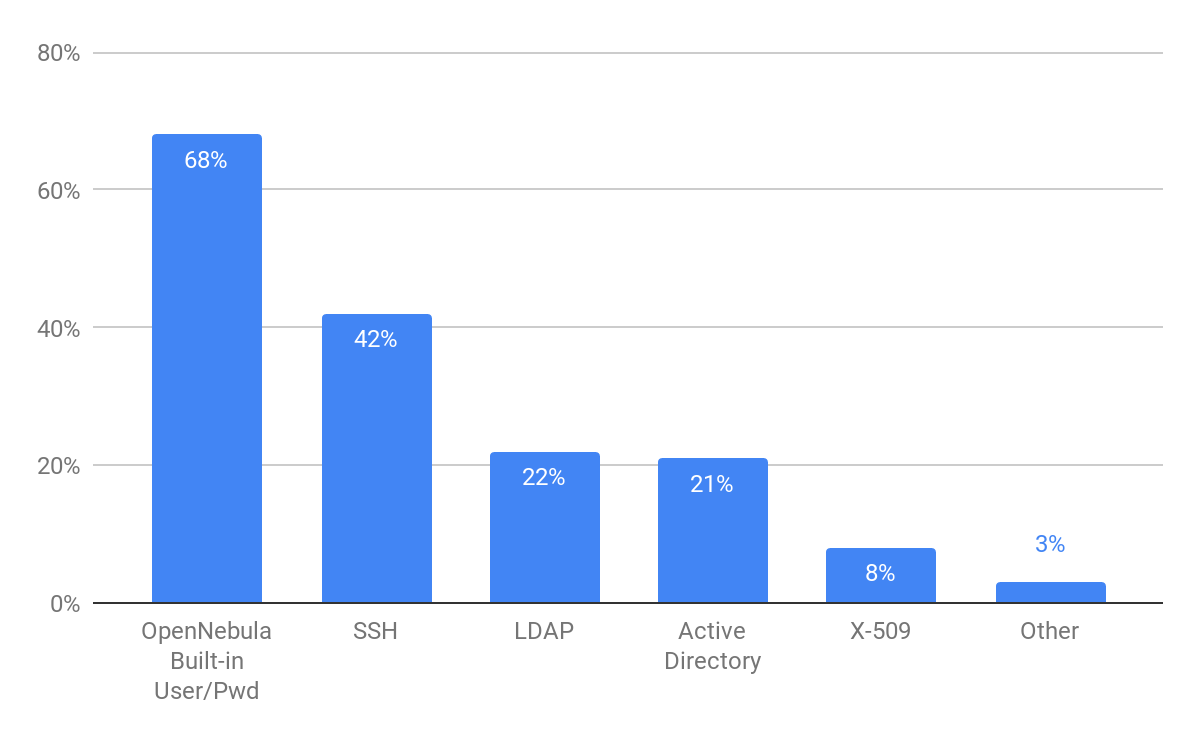 CentOS and Ubuntu are still the most popular Linux distributions for creating OpenNebula clouds with usage at 48% and 41% respectively, which is a slight upward movement from 44% and 40%.  Debian has remained steady at 22% usage. 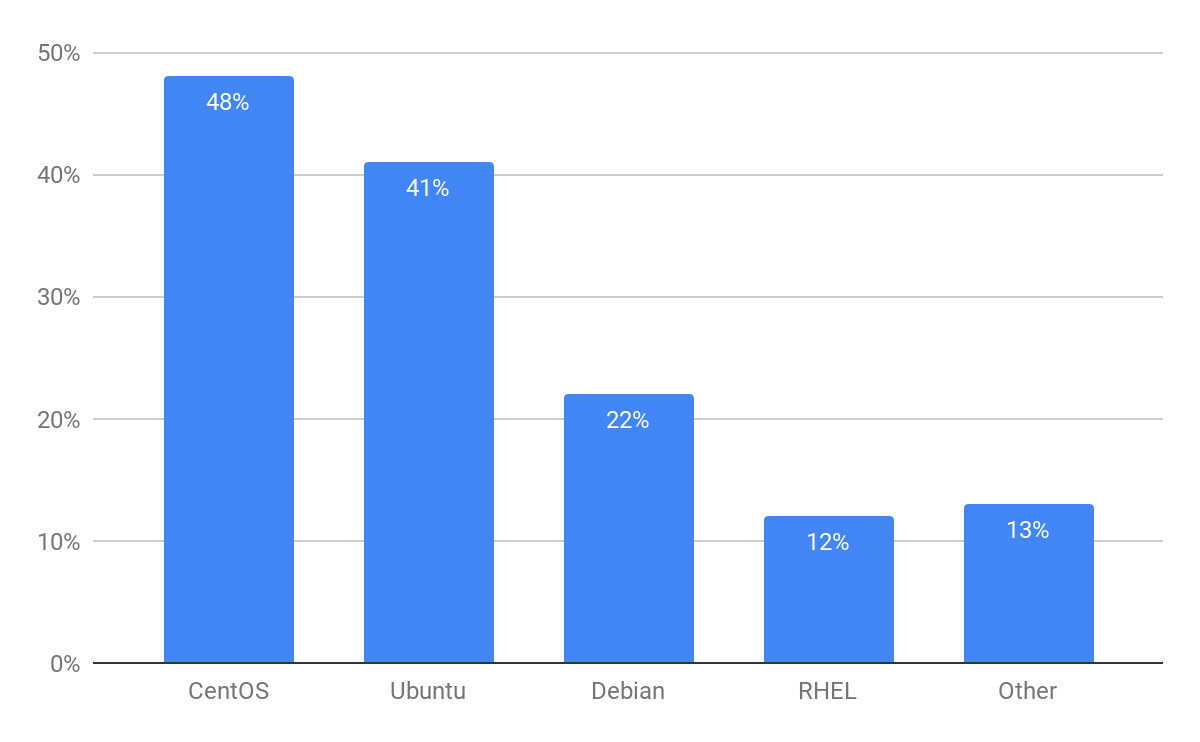 A new question was introduced to understand what types of configuration management systems are employed to take advantage of automation.  The most common platform is Ansible, with 50% usage. Puppet is another popularly used tool, at 29%. There are a few other tools used with some regularity, like Chef (8%) and SaltStack (6%). And 27% of respondents state that they do not use any configuration management system at all. 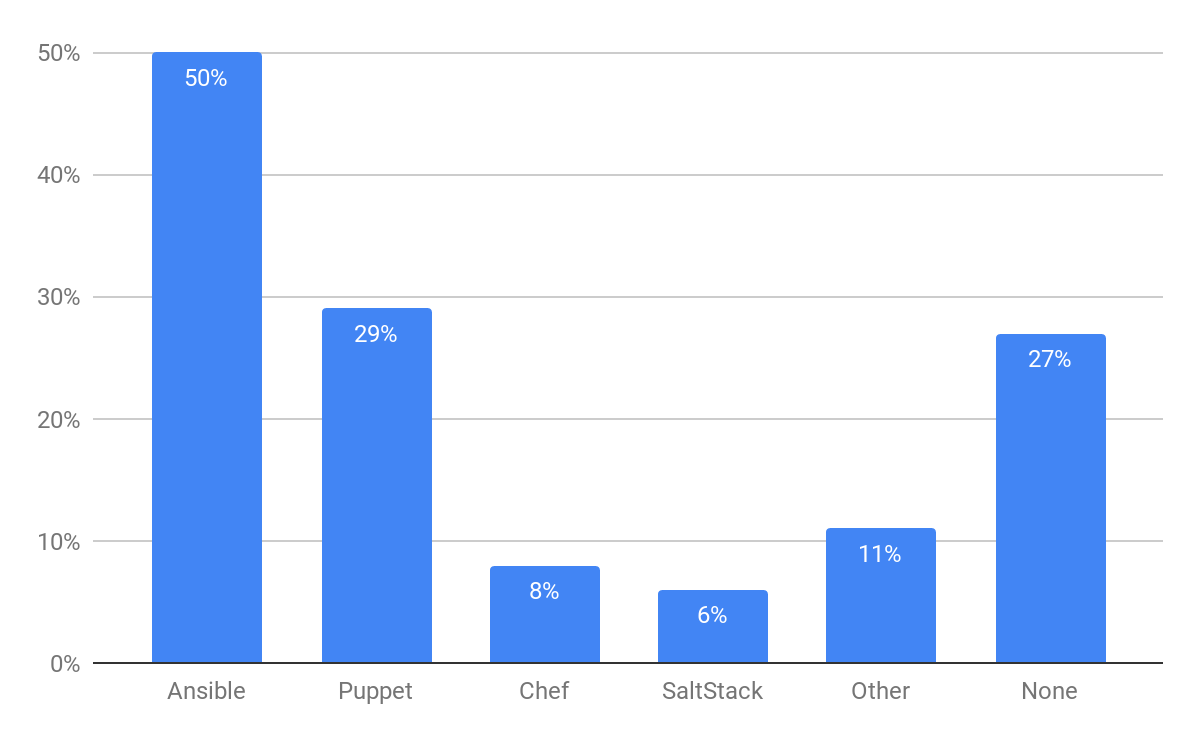 Similar to the types of configuration management systems, we asked which tools are used to deploy OpenNebula, and the same set of tools lined up in a similar fashion. Ansible is the most-commonly used with 40% usage, and Puppet is used by 21%.  Tools like Chef (5%) and SaltStack (4%) have a small user base, while 41% of respondents state that they do not use any deployment tools. 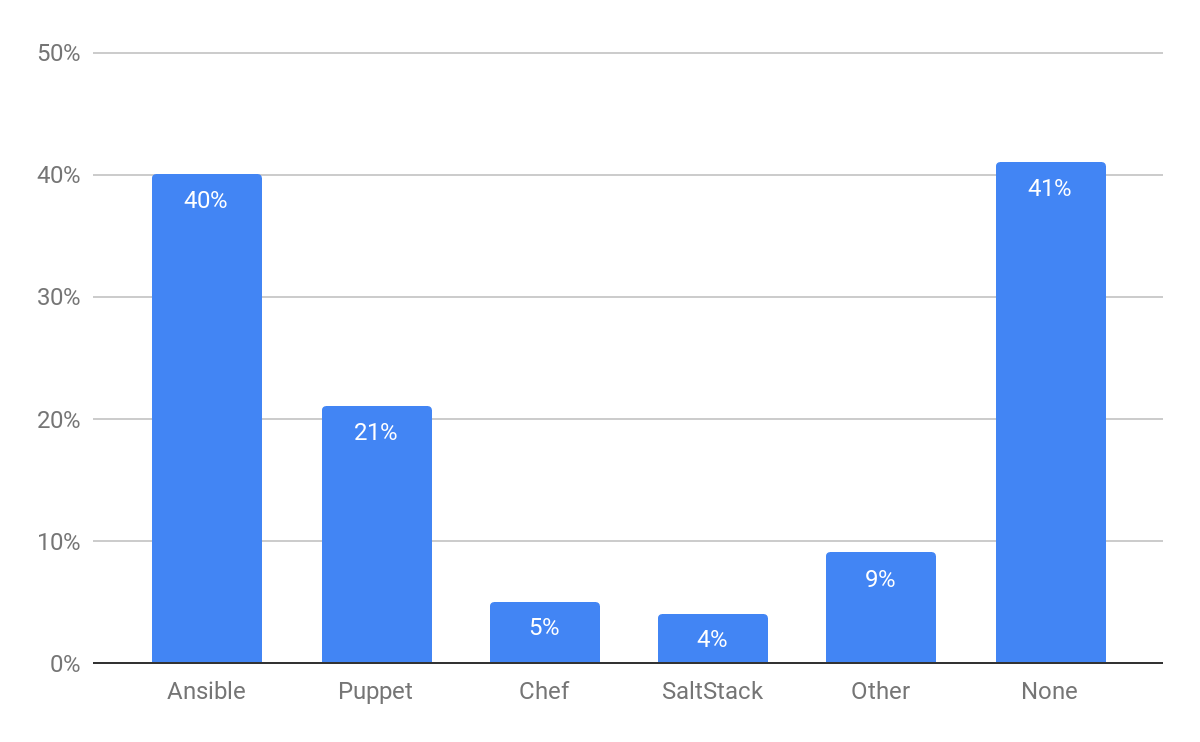 Another question asked inquired about Container or PaaS tools being used to manage applications.  While a large part of the respondents (48%) state that they are not yet using these types of tools, for those that are using these types of tools, the most commonly used is Kubernetes with 25% usage. Docker Swarm (14%) and OpenShift (10%) follow in popularity, while 9% of respondents state they are building their own solutions. 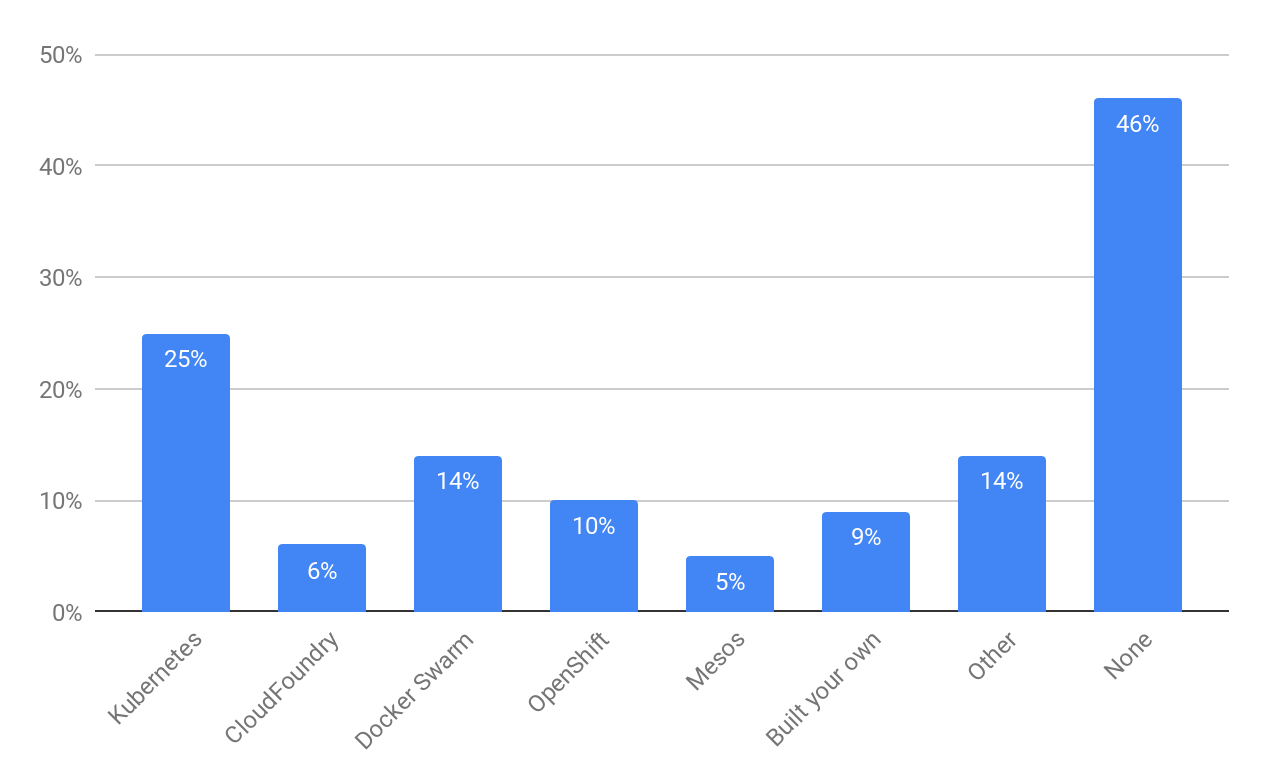 When asking about which Advanced Components are used or planning to be used, a large selection of components were confirmed.  The most commonly selected was “High Availability” at 65%. Other popular components are “Application Containerization” (47%), “Data Center Federation” (43%), and “OneFlow” (42%).  A few others are listed, while 14% state that they are not using or interested in using any advanced components, just yet. https://opennebula.io//opennebulaconf-2016-call-for-speakers-open/”>Call for Speakers is now Open!. If you are a OpenNebula practitioner, user, architect, devop, admin or developer and have something to share, we welcome your submission.
More information is available from the event site. The Conf has already its From a provisioning interface perspective, a large majority of OpenNebula users are taking advantage of the Sunstone interface (82% of users). The CLI and API both have a fairly extensive usage across the community with 41% and 39% respectively, and the Cloud View (Self-Service portal) has 27% of usage. 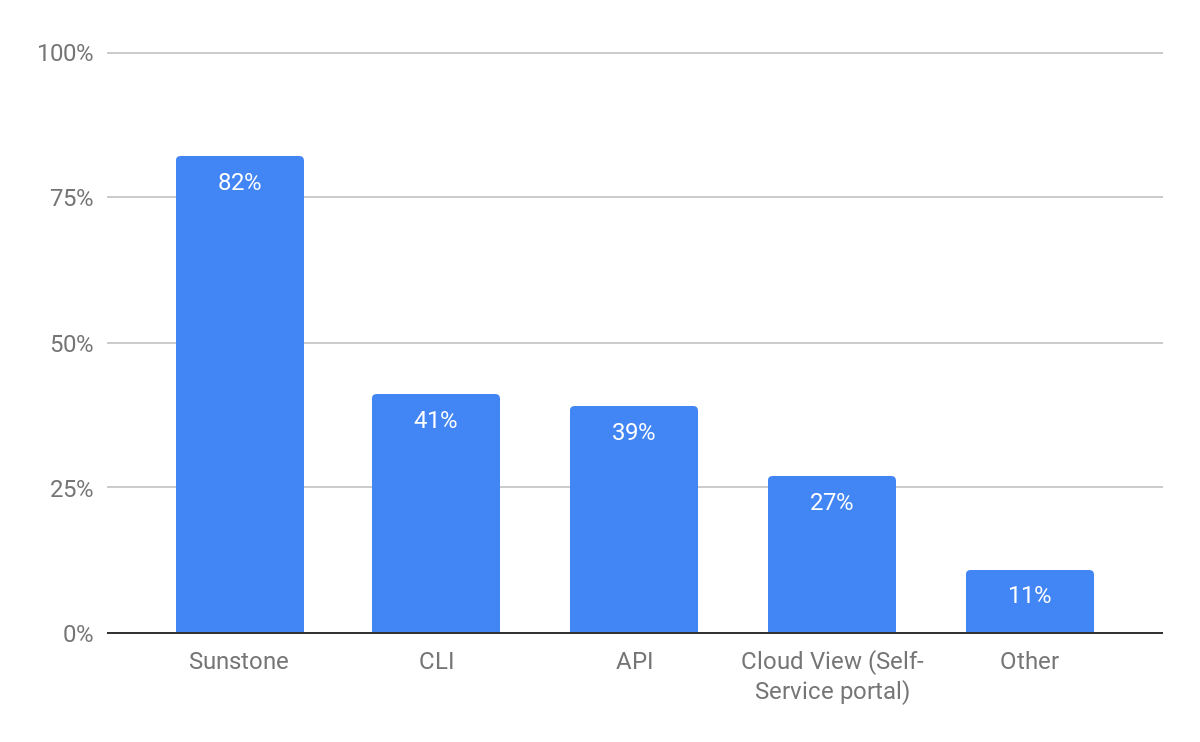 We inquired about which OpenNebula API’s are being used or planned to be used in the near future, and curiously, a very large constituent (45%) has shown interest in being able to soon utilize Python bindings when v.5.8 is released. Of other API’s currently available at the time of the survey, use or intended use of Ruby bindings is common with 26%, while JAVA and Go bindings follow with 16% and 13% respectively.  29% of users state no current interest in using OpenNebula API’s. 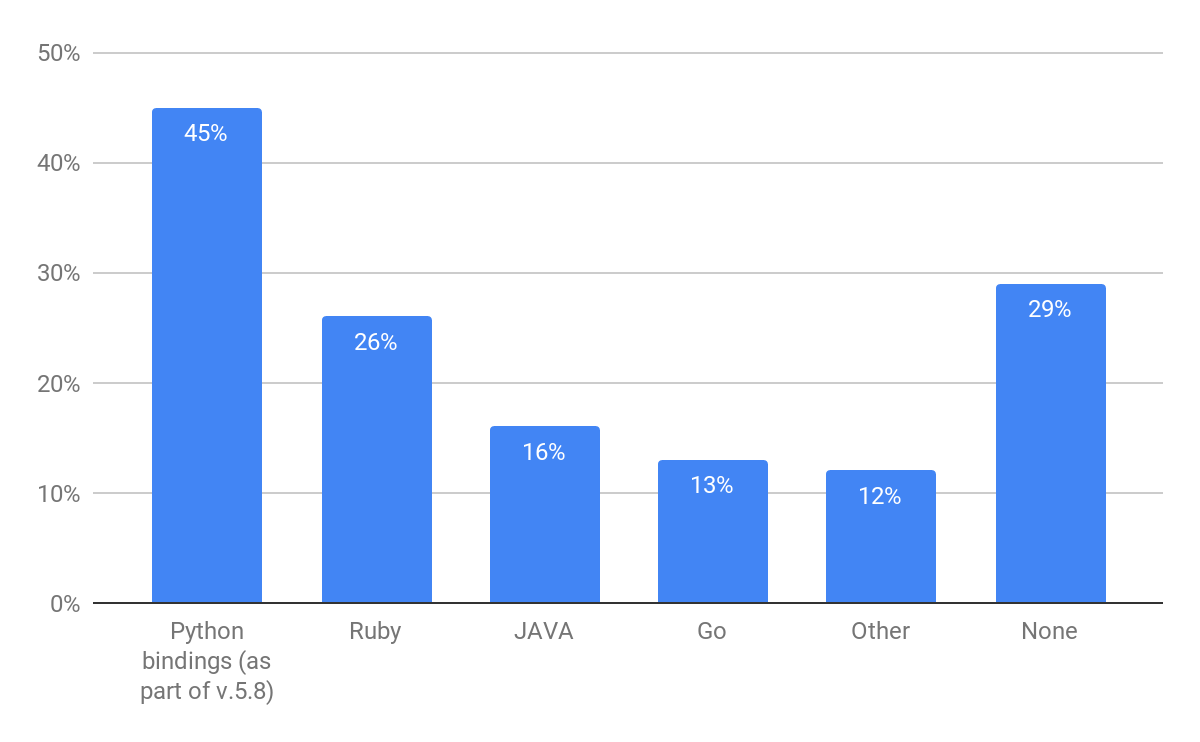 And lastly, as seems to be the case for many years running, “Stability”, “Flexibility”, and “Openness” continue to be the top reasons why users choose OpenNebula. 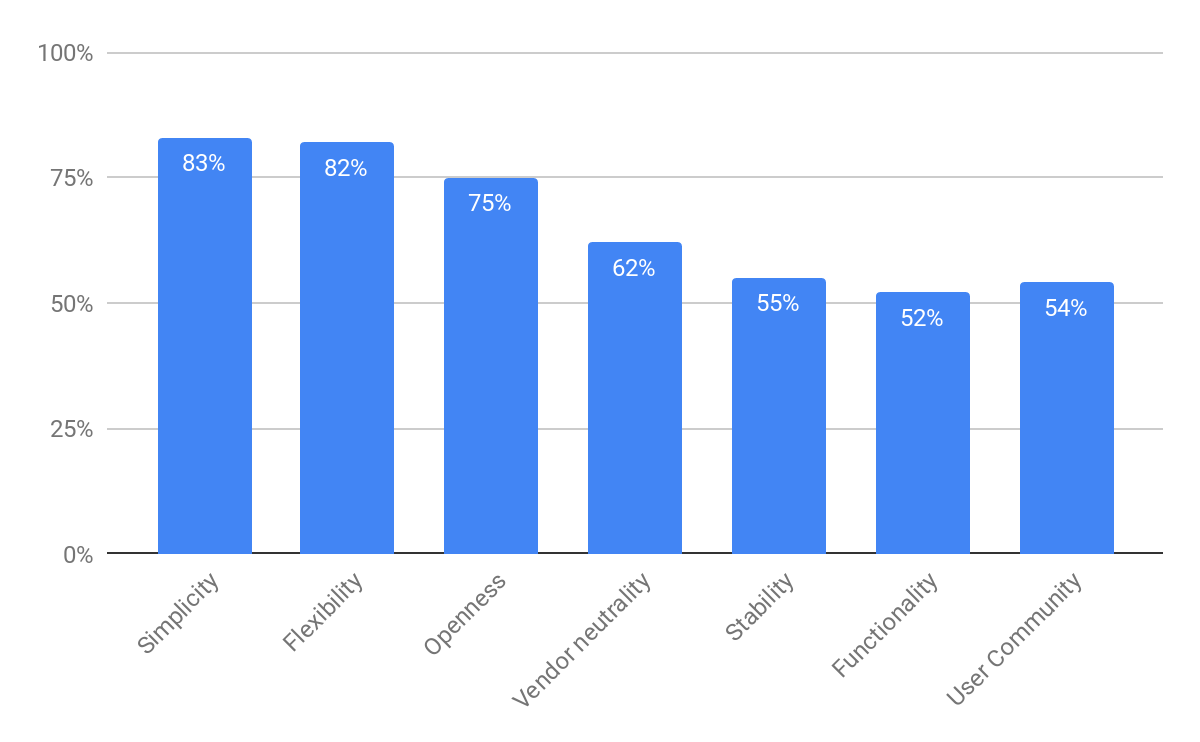 Why OpenNebula? (allows for multiple selections)