Balance between User Base and Community in OpenStack and OpenNebula

In our last post “OpenNebula vs. OpenStack: User Needs vs. Vendor Driven” we stated that “OpenStack penetration in the market is relatively small compared with the investment made by vendors and VCs”. We have received several emails from people asking for the numbers that support this statement. This conclusion arises from the comparison between OpenNebula and OpenStack user base, a well as between the resources invested in development and marketing by each of them.

OpenStack is experiencing explosive growth in the number of developers, with more than 200 companies contributing code, 15,000 people and 850 companies involved according to its web site, and almost 1,000 developers involved in its latest release. However, the number of users and the size of the deployments are not that impressive, at least compared with this software development force.

Let us compare the user base of OpenNebula and OpenStack by using their latest surveys: 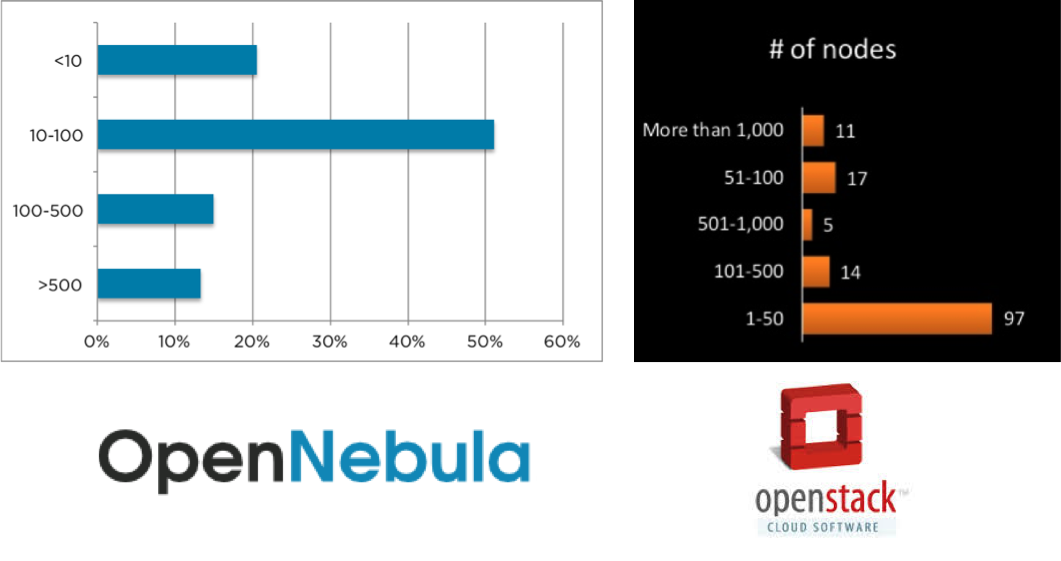 We could also use the volume of web searches according to Google Trends to compare the impact of both projects. The ratio in the number of searchers between OpenNebula and OpenStack during the last 12 years is 1/20. This mainly reflects the successful marketing of OpenStack. OpenNebula mainly invests its resources in developing technology and serving its users, being really vendor agnostic and free of marketing.

There is also a quarterly comparative analysis of the community activity (mailing lists traffic mostly) of the four main open-source cloud management platforms: OpenStack, OpenNebula, Eucalyptus and CloudStack. The number of threads and participants in OpenStack is one order of magnitude higher than in OpenNebula. This mostly reflects a higher number of developers. Moreover, it is also worth noting that development coordination in OpenNebula is done through a redmine portal and not through a mailing list.

We conservatively estimate the investment in OpenStack is approximately $300 million per year:

So $300 million per year is a good conservative estimate. We have seen other estimations above $0.5 billion per year, some reaching to $1 billion per year. In any case, over a few years, it’s billions. Will these companies ever get their money back?. I see VC’s starting to ask “Where’s our future money?”. Summarizing, a relatively small user base, and so penetration in the market, compared with the investment made by vendors and VCs. OpenNebula, with a budget at least two orders of magnitude lower, is achieving a similar user base. You can draw your own conclusions.