OpenNebula 5.2 ‘Excession’ Beta is Out!

The OpenNebula project is proud to announce the availability of the first beta release of OpenNebula 5.2 ‘Excession’. OpenNebula 5.2 (Excession) is the second release of the OpenNebula 5 series. A significant effort has been applied in this release to stabilize features introduced in 5.0 Wizard, while keeping an eye in implementing those features more demanded by the community.

As usual almost every component of OpenNebula has been reviewed to target usability and functional improvements, trying to keep API changes to a minimum to avoid disrupting ecosystem components. Also, new components have been added to enhance the OpenNebula experience. 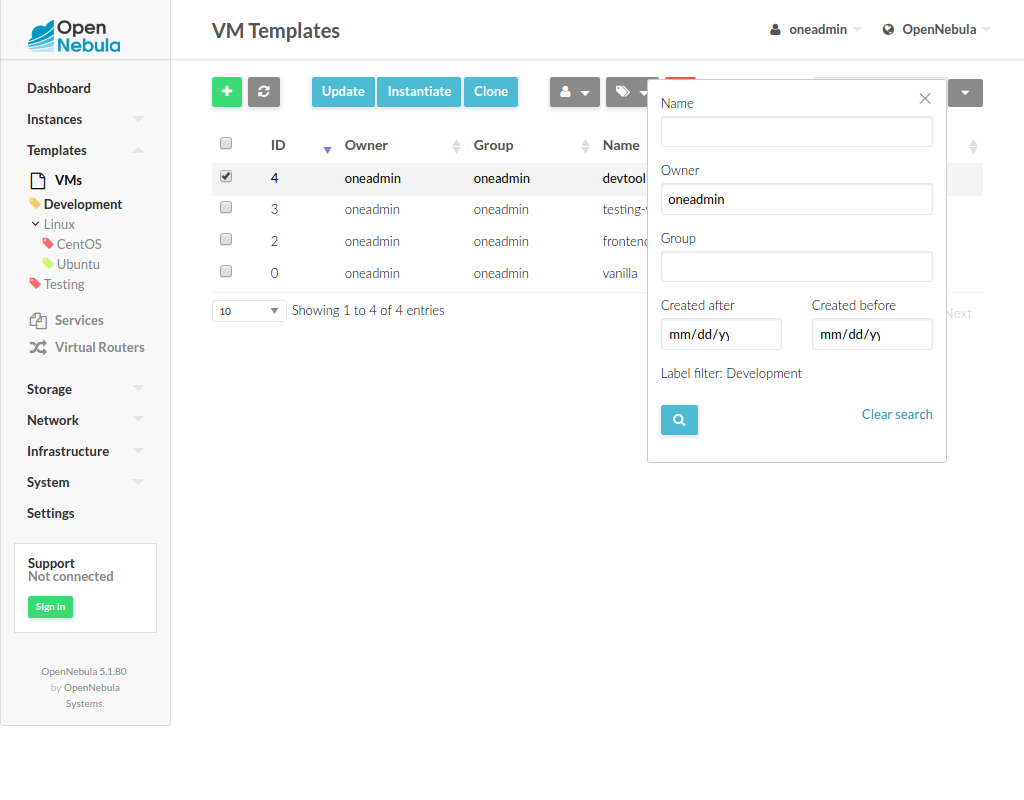 One important new module is the IPAM subsystem. In order to foster SDN integration, a important step is being able to integrate OpenNebula with existing IPAM modules, in those cases where outsourcing of IP management is required in the datacenter. Fitting in the OpenNebula architecture design principles, the IPAM subsystem interacts with IPAM servers using drives, and as such a IPAM driver lets you delegate IP lease management to an external component. This way you can coordinate IP use with other virtual or bare metal servers in your datacenter. No default integration is provided, but rather to effectively use an external IPAM you need to develop four action scripts that hooks on different points of the IP network/lease life-cycle.

Another great addition in Excession is the ability to use group bound tokens. The goal is to be able to use OpenNebula for different projects, which are identified with different groups. For instance, the same user can use OpenNebula for “WebDevelopment” project and a “BioResearch” one, for instance. This user can request a couple of tokens tied to each of these groups. Upon login with the “WebDevelopment” token, she will only be seeing resources from that particular project, and all new resources (VMs, images, networks) will be created within that group, isolating them from the “BioResearch” group. This feature is available both in the CLI and Sunstone, with helpers and dialogs to create, maintain and use the tokens. 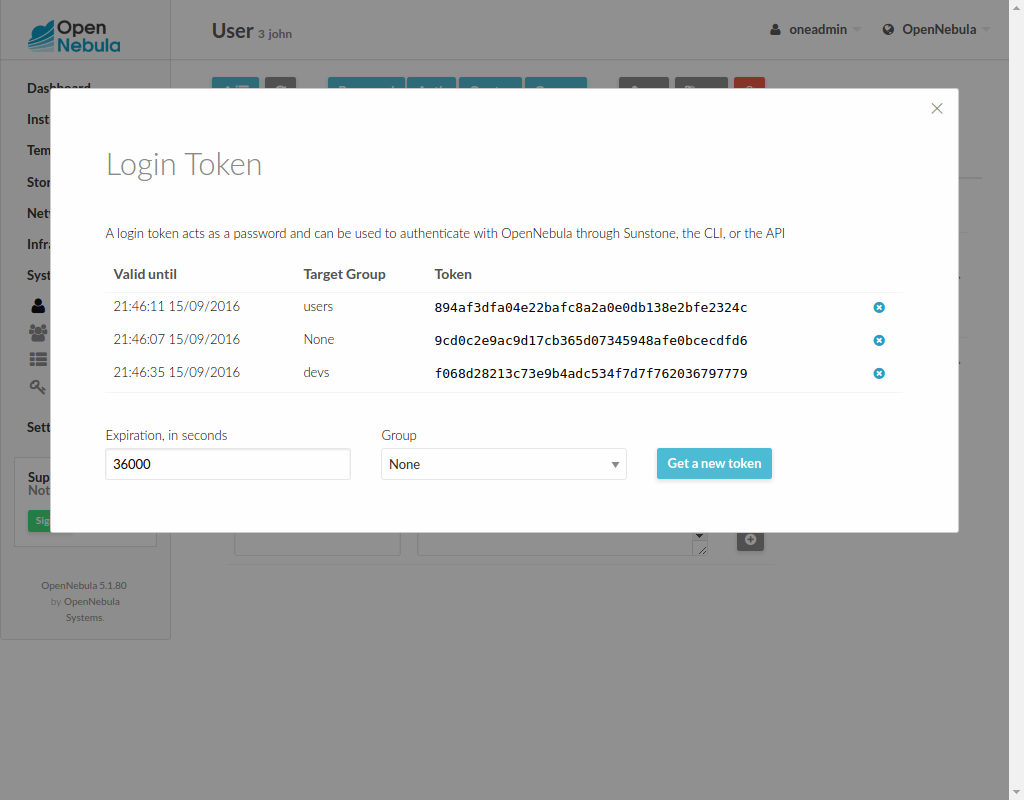 All the OpenNebula drivers have been improved for robustness. For instance, a new default timeout (which is configurable) has been defined to identify hanging operations and kill crashed processes. In this regard, the EC2 drivers has also been thoroughly revisited, being updated to the v2 of the aws ruby gem, ensuring compatibility with all Amazon EC2 regions. Error handling has been improved as well in the EC2 driver, adding operation retries to circumvent those situations where the EC2 API is not consistent, and adding improved logging.

Sunstone is the face of OpenNebula for both administrators and users, and hence a constant target of enhancements to improve usability. Excession brings to the cloud table stabilized features that were introduced in the Wizard maintenance releases, like for instances advanced searches (that now are maintained regardless of tab switching), labels colors and ergonomics, improved vCenter dialogs and import tables (now with feature à la Gmail), hyperlinks to access resources displayed in the info tabs, and many other minor improvements. 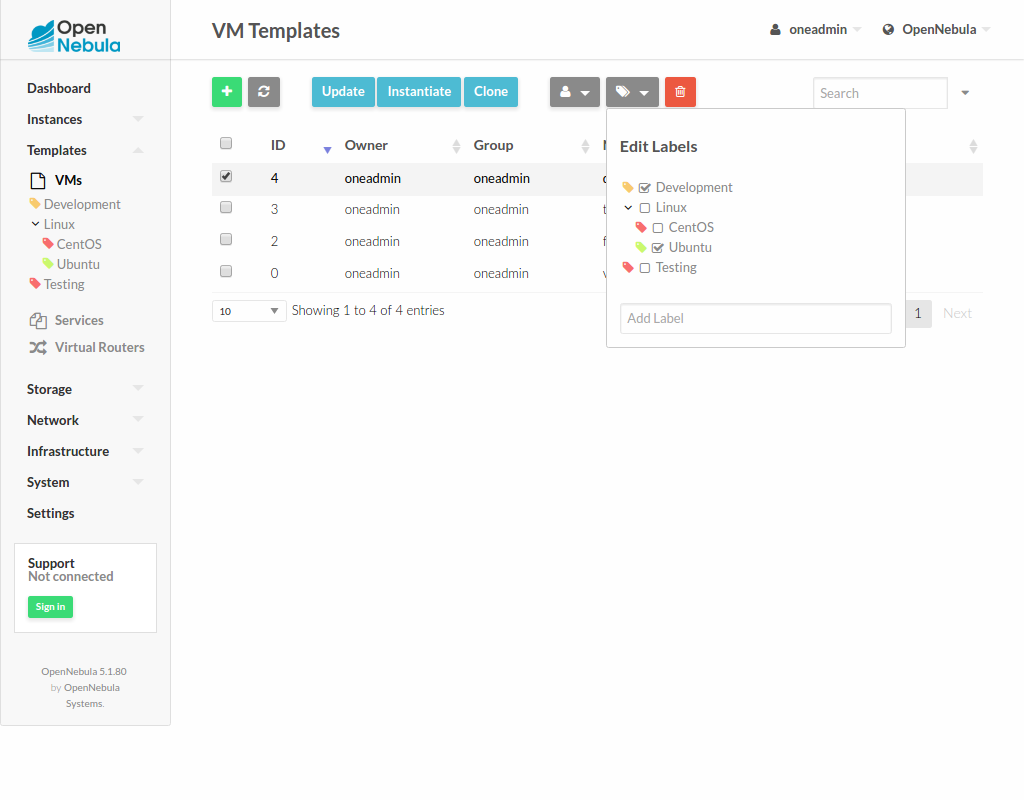 This OpenNebula release is named after the Ian M. Banks novel, a recommended read, as well as having a fitting slang meaning, “something so technologically superior that it appears as magic to the viewer.”. We are confident that OpenNebula, if not really appearing as magic, at least solves elegantly your IaaS needs.

The OpenNebula team is now set to bug-fixing mode. Note that this is a beta release aimed at testers and developers to try the new features, hence not suitable for production environments. Feedback is more than welcome for the final release.

The group token functionality and dynamic LDAP group mapping into OpenNebula groups were funded by BlackBerry in the context of the Fund a Feature Program.