OpenNebula: the only European open-source management platform to build IaaS clouds! A success story in exploitation of FP7 research results 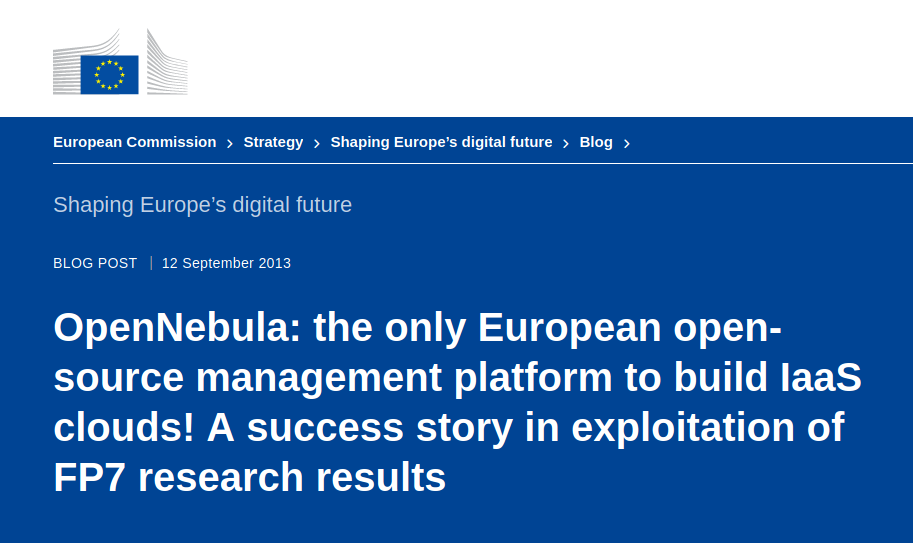 OpenNebula has played an important role in driving and supporting the transition to cloud computing and thus accelerating the pace of innovation in Europe.

OpenNebula started in 2005 as an internal research project of the University of Madrid and in November 2007, the open-source community called ‘OpenNebula.org’ was created. Many of its innovative features were developed to address the requirements of business use cases from leading companies across multiple industries in the context of the flagship FP7 project in Cloud Computing, RESERVOIR. As a technology spin-off of RESERVOIR, OpenNebula has been enhanced by adding new functionalities in the context of several other EU-funded cloud research projects, like StratusLab and 4CaaSt. Thanks to its innovative tools it has contributed to the most advanced cloud deployments. Additionally, OpenNebula is being used as reference open stack for cloud computing in several large research and infrastructure projects, such as BonFIRE, EGI or Helix Nebula, that are building pan-European multi-cloud infrastructures.

More importantly, OpenNebula has played an important role in driving and supporting the transition to cloud computing and thus accelerating the pace of innovation in Europe.

OpenNebula is a very active open-source project with a very large user base, with more than 5,000 downloads per month and thousands of deployments including industry leaders and leading research and supercomputing centers. The development is driven by its community in order to support the most wanted features and also by other international research projects.

Many large companies, research centers and public entities are using OpenNebula to cut costs, to improve their existing IT services, or to support new innovative service. Moreover, OpenNebula is also an open cloud enabler that is helping many smaller players, mainly SMEs, in the ICT Industry to be cloud active by allowing easy access to the functionalities of the cloud. Many organisations have adopted OpenNebula to build their private cloud.

You can learn about all these and more by joining the first ever OpenNebula Global Conference (http://opennebulaconf.com) is taking place in Berlin from the 24th to the 26th of September 2013.

This conference represents a meeting point for OpenNebula cloud users, developers, administrators, builders, integrators and researchers and a unique opportunity for discussion and collaboration with other projects. This event is all about enabling the next generation platform for enterprise cloud computing and data center virtualization.

If you want to take this great opportunity and play a major role in shaping the future, you can still register at http://opennebulaconf.com