In this blog we try to highlight some of the key elements involved in building a private Cloud environment using OpenNebula.

The goal was to setup a Platform-as-a-Service (PaaS) sandbox environment, where our practitioners can get a hands-on practice on various open Source based tools and technologies. We were successful in creating an On-Demand model where Linux based images having required software (e.g. MySQL, Java or any configurable middleware) could be provisioned using the OpenNebula web based interface (Sunstone) along with email notification to the users.

The highlight of the entire exercise was using nested Hypervisors to setup OpenNebula cloud – a feature which was probably being tried out for the first time (we checked the public domain and OpenNebula forums where nobody was sure if such a scenario existed; and were not certain if it was feasible ).

We started with OpenNebula version 2.2 and then later on upgraded to 3.0. Hypervisor used was VMware ESX 4.1 and Centos 5.5 & 6.0 OS was used for the provisioned images. The hardware employed was IBM System x 3650 M2 for Cloud Management environment and administration while IBM SAN storage for provision of images. 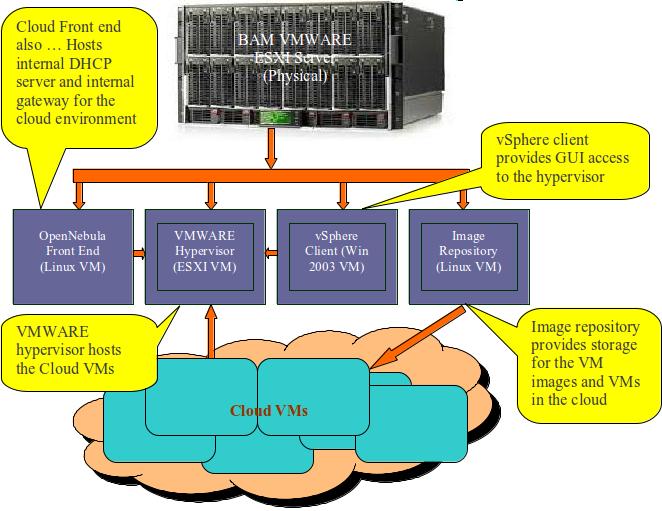 We have configured the above scenario in a single ESXi box (Physical Server).

As you can see in the architecture diagram, we configured OpenNebula(Front end) to use the VMware hypervisor(ESXi VM) to host VMs, the VSphere client on a Windows VM to access the ESXi(for admin work). One VM was designated as Image repository where all client images were stored. We also configured NFS on Image repository VM.

Note: – Before starting the installation, you have to install EPEL (Extra Packages for Enterprise Linux). EPEL contains high quality add-on packages for Centos and other Scientific Linux that will be required for compatibility with OpenNebula.

For storage space, we used NFS for OpenNebula and VMware storage. For that we created a separate NFS server or you can use same server. The following is the architect diagram that we used – 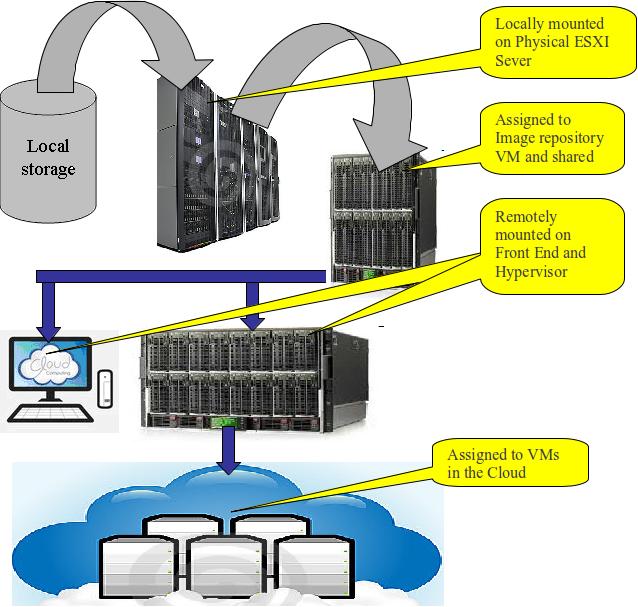 In above diagram, we are using SAN storage and mapped it to physical ESXi. After that, storage space has been distributed among VM’s. For Image repository, we took a large chunk of space to make it as NFS server also. This large chunk of space has been shared between ESXi and Front End. Naming of NFS storage space should be same here for all three servers.

One more important point that I have to mention here is that the name of the datastore should be same in both VMware hypervisor and FrontEnd machine as shown below:

A point to note about the VMWare

Remember that your VMware ESX server should not be free version. Either it has to be a limited edition of 60 days or a complete licensed version. Otherwise you will get errors while deploying VM from FrontEnd machine. You may use the following to test VM functionality through command prompt.

Once the connectivity is established, you can create VM network and deploy VM from FrontEnd machine. I will recommend while creating vmdk file ( which you will later use as an image ), you should install VM tools also.

A point about using context feature:

At present context feature for VMware is not supported by OpenNebula 3.0. This feature has been made available for only KVM and XEN Hypervisors. With the help of context feature, OpenNebula FrontEnd can provide IP address, hostname, DNS Server, gateway, etc to client VM’s. As a workaround for VMware ESXi, we used an alternate method – writing a custom script that emulates OpenNebula’s Context features. This script provides IP address for client, hostname, VMID etc. After assigning these details to the VM, it emails the Cloud admin with the necessary information.

Some errors which surfaced during the OpenNebula installation and configuration and their solutions are given below:

The team faced several challenges during the journey. Some of the interesting ones are highlighted as follows: